I watched in dismay as fertilizer stocks tanked on Friday after an influential analyst barged in with a string of downgrades. Dahlman Rose didn’t leave many – Potash Corp./Saskatchewan (USA) (NYSE:POT), CF Industries Holdings, Inc. (NYSE:CF), Agrium Inc. (USA) (NYSE:AGU), and Rentech Nitrogen Partners LP (NYSE:RNF) were bundled up in the ‘sell’ room, while Mosaic (NYSE:MOS) was demoted to ‘hold.’ All I know is that if you dumped your stock because Dahlman said so, you may come to regret it.

Fool colleague Rich Smith was right to point out that Dahlman sports 75% accuracy in its chemical picks on Motley Fool CAPS and has a brilliant point score, but that’s just half the story. The top five stock picks where Dahlman scored the highest don’t include a single fertilizer player, and the three where it misses most are all fertilizer stocks, including CF Industries Holdings, Inc. (NYSE:CF) and PotashCorp.

More important, why should Dahlman’s on-and-off ratings affect any Foolish investor? Investing is not about a month or a quarter. How much faith can you put in an analyst that does a complete 180 in less than a month’s time? You don’t believe me?

Case in point: Dahlman upgraded CF to a buy on Jan. 24 this year. On Feb. 22, it turned into a sell call. In between, CF had already shed 10%. So those who dove into CF on Jan. 24 just because Dahlman thought they should are deep in the red now. Dahlman scored a double whammy with Agrium as well, which was gifted an upgrade on the same day as CF. By Friday, Agrium’s stock had lost 6%.

In January, Dahlman analysts believed that “most of the benefit we see will be on the nitrogen products.” And this is what Dahlman had to say last Friday: “We believe that the best market conditions for [Nitrogen, Phosphorus, and Potassium fertilizers] are behind them as new capacity moves forcefully ahead.” Do market fundamentals really swing so fast?

First, new capacity takes years to come online in a capital-intensive industry like fertilizers. Second, even if a company’s project is near completion, it will probably wait to bring it on until the existing machines are fully utilized. Companies that deal in potash and phosphate such as PotashCorp, Mosaic, and Agrium scaled down production considerably last year as demand from key global markets dried up. Recent contracts from China and India means these companies should have a better year as compared to 2012, but I do not see any over-capacity.

I don’t think even CF will second Dahlman’s thoughts. In fact, CF expects a robust nitrogen market for the first half of 2013 “given strong demand and limited supply due to the delays in new capacity coming online.”  Agrium sees “supply uncertainty” to support the nitrogen market. Corn prices may have softened but farmers are flush with cash, even those that were hit by the ravaging drought last year, thanks to crop insurance pay-outs. The USDA expects all-time high corn acreage this spring with record farm income. Also, drought conditions still prevail in large parts of major corn-growing areas. If they don’t improve, output could be restricted, which in turn could keep a check on crop price declines.

When Sell Means a Buy

CF, Mosaic, and Agrium beat Street estimates in their respective last quarters. Only PotashCorp whiffed. Rentech Nitrogen Partners LP (NYSE:RNF) has yet to announce its fourth-quarter numbers. But if we chart out how these companies have grown their bottom lines over the past five years, the range astounds. Nitrogen-centric CF and Agrium have handily outperformed. Rentech wan’t featured below because it has been around for just over a year. Over the time period, Rentech’s net income grew 34%. 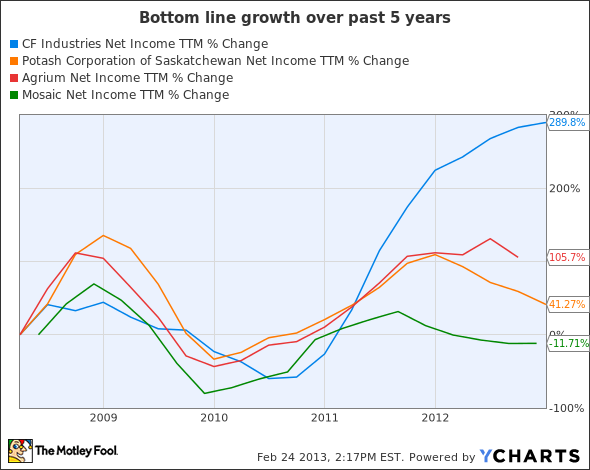 Dahlman has its own reasons to believe otherwise, but I feel most of these stocks call for attention. I might sideline Mosaic as its performance over the years has left much to be desired, and its core nutrient, phosphate, makes things tougher. Rentech is a pretty new entrant, and may excite those who want to bet on alternative fuels like urea-based diesel-exhaust fluids. But its dividends may not be sustainable as its free cash flow is too low to justify high payout.

PotashCorp’s stock is within an arm’s length from its 52-week low, and has great chances of bouncing back for several reasons: the company leads in the potash market, enjoys cost advantages, gets a part of revenue from nitrogen, and is boosting dividends. Agrium‘s diverse portfolio (of agriculture products) allows it to tap wider opportunities than peers, thus giving it an edge. With its largest shareholder pushing for major changes, the company could only get better with time.

That leaves us with CF, which by far looks like the best bet. Rock-solid financials, great shareholder returns, and of course, dominance in the king of nutrients, nitrogen: CF is a must buy. And yes, it also has the most compelling valuations. Check for yourself.

Ironically, you can thank the carnage Dahlman’s calls caused on Friday for these attractive valuations. If you know your company well, don’t allow these crazy burst of analyst rankings pull the wool over your eyes. Instead, take a bite out of the welcome opportunity. At least I would do so, if I were you.

The article Acted on These Analyst Downgrades? You Should Seriously Reconsider originally appeared on Fool.com and is written by Neha Chamaria.

Target Corporation (TGT) and More: How you Should Play With These Forward Picks...