When Tesla Motors Inc (NASDAQ:TSLA) began to bring electric cars to a larger segment of the population, there were many misconceptions about the company and EVs in general. In a previous article I discussed some of the most common myths that follow Tesla and its products but I found that one article was simply not enough to explain the truth behind Tesla in depth. In this article we will take a look perhaps the largest myth, one that is used to damage Tesla Motors Inc (NASDAQ:TSLA)’s image, sometimes without full knowledge of the company, sometimes to make an anti-Tesla argument.

Myth #3: Cars for the rich only 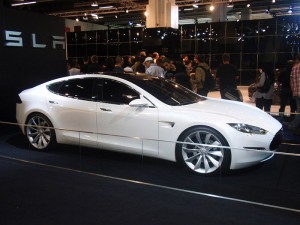 The basis for this myth finds itself partly in political circles that are opposed to EVs and partly from people only looking at the vehicles Tesla Motors Inc (NASDAQ:TSLA) is selling now. At first it would appear that Tesla is a company only intending to offer cars to the rich. The $100,000+ Tesla Roadster and the $70,000+ Model S build an image of high performance but also high price.

But Tesla does not have the production resources of the biggest automotive players. Even if Tesla were to have a $30,000 car ready for production, the automaker would need to produce it on a much larger scale than Tesla currently produces the Model S at. The target of 20,000 units per year works fine for a luxury car like the Model S but would mean nothing if the car is competing with the Toyota Motor Corporation (ADR) (NYSE:TM) Corolla or even the BMW 3 Series. Since Tesla Motors Inc (NASDAQ:TSLA), right now, is being restricted on the production side not the demand side, if the company can sell 20,000 units of any car, it only makes financial sense that it be a luxury one that yields greater revenues.

However, Tesla does not want to stay only at the high end of the market. After the Model X, Tesla CEO Elon Musk is declaring war on the BMW 3 Series with Tesla’s own Gen III sedan due out in 2016 or 2017. Valued at approximately US$56 billion, BMW AG not only produces the 3 Series but also produces numerous other models, both through the BMW brand as well through MINI and Rolls-Royce. At BMW, the game is clearly about volume to lower the prices of its luxury offerings, something that Tesla Motors Inc (NASDAQ:TSLA) is working towards but will remain limited by for at least the next few years.

For most people, a BMW 3 Series is still not cheap and for them, Tesla has long term plans to expand into lower price segments as production capabilities and technology allow. Musk has made the company’s vision clear that it will one day produce mass market transportation and this would mean taking on competitors in the $20,000 range. Toyota Motor Corporation (ADR) (NYSE:TM) has long been a partner of Tesla selling the start-up the former NUMMI facility at a cut rate, ordering Tesla Motors Inc (NASDAQ:TSLA) parts, and financing the company through a $50 million stock purchase. But Toyota has put its EV program largely on hold now as it develops the technology and expands its hybrid line with new models and three new Prius varieties. By the actions of Toyota, its clear that major automakers just don’t see the $20,000 range as profitable for an electric vehicle. Seeing as some estimates peg the 85 kWh battery pack of the Model S close to $30,000 itself, any EV in this price segment would have significantly less range and appeal to fewer consumers. Both Tesla and Toyota hope that one day technology will improve to the point that EVs can be sold in this range and make a profit but for the moment, it just doesn’t make financial sense, especially for start-up Tesla Motors Inc (NASDAQ:TSLA) with limited resources on hand.