A Retirement Savings Stock Every Investor Should Own

Whenever I need inspiration for a new stock idea, I think about Levi Strauss.

Yes, Levi Strauss — the man who invented blue jeans. As a scrappy European immigrant to the land of opportunity, Strauss went West during the California Gold Rush in the mid-1800s seeking his fortune. But he didn’t go as a prospector. Instead, Strauss made his first fortune selling pick axes, shovels and other supplies to 49ers who were in search of gold. His second and much larger fortune was made when he decided to make pants out of tent canvas, dye them blue with indigo and sell the durable outerwear to would-be gold miners.

Simply put, Strauss was an expert in finding trends and profiting from them.

This kind of savviness reminds me of a company I’ve followed for more than a decade now. I’m talking about Senior Housing Properties Trust (NYSE:SNH), a real estate investment trust (REIT).

And I like this company particularly now, because it’s seizing a huge opportunity to make a lot a of money.

As 10,000 people in the United States turn 65 every day, they’ll need somewhere to go as they get older and need more care. Senior Housing manages a $6.2 billion portfolio consisting of nearly 400 properties that include senior-living centers, skilled-nursing facilities, medical office buildings and wellness centers across 42 U.S. states.

Obamacare headwinds? Fuggedaboutit
Considering the rapidly-changing landscape of U.S. health care, it’s easy to see why Senior Housing could face significant headwinds at first glance. After all, the largest portion of the nation’s aging population still heavily relies on government subsidies such as Social Security and Medicare to help pay for senior lifestyle and care facilities. In this sense, a health care REIT would likely be negatively affected by slow government pay and the fiscal uncertainty of federal entitlements.

But that’s not the case with Senior Housing. About 94% of Senior Housing’s net operating income comes from private-pay properties. This means tenants pay out of their own pockets, rather than relying on a government subsidy or voucher system. So the company’s dependence to government reimbursement (and the uncertainty that comes with it) is extremely limited. In addition, about 31% of the properties are multi-discipline medical office buildings with blue-chip health care tenants such as Stryker Corporation (NYSE:SYK), Boston Scientific Corporation (NYSE:BSX) and Quest Diagnostics Inc (NYSE:DGX).

Strike gold with the golden years…
The U.S. population of 85-plus is growing at a much faster rate than the rest of the country’s population, according to the U.S. Census Bureau. By 2025, the population of 85-plus is projected to reach 25% compared to 15% for those under 85. And although the current growth rate of seniors who are 85-plus sits right at 5%, it could double in just four years.

These undeniable demographic trends and the stock’s consistent performance, make Senior Housing a great addition to any retirement portfolio. It’s already a core holding in many of my client’s portfolios. Carla Pasternak, director of income research for StreetAuthority’s High-Yield Investing , also has recommended it as a key Retirement Savings Stock.

The company has been expanding quickly. This year alone, Senior Housing raised more than $650 million in capital market transactions and has access to a $750 million unsecured credit facility. Despite this fast growth, it’s been able to keep a lowly-levered balance sheet compared to most REITS, with a debt-to-capital ratio of just 30%.

In addition, the company has performed consistently through the years. Besides a growing stock price, Senior Housing has steadily raised the dividend from $1.20 a share in 2000 to a recent $1.56 a share, which brings the yield to roughly 7%. Add that to capital appreciation and you have a compounded annual return of 55% during the past 12 years. Not bad for a “lost decade” of investing… 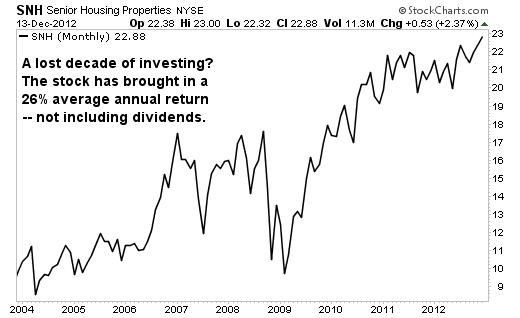 The fact that REITs are required by law to pay 90% of their income as dividends to shareholders — regardless of whether their share price goes up or down — makes this an even sweeter deal.

Risks to Consider: Although the lion’s share of Senior Housing is private pay — which implies relatively affluent tenants — tougher economic conditions or external circumstances such as inflation, could affect the company’s pool of qualified prospects in the senior lifestyle and assisted-living segment. In addition, as part as their different tax structure, REITs don’t pay income taxes. This means their dividends are usually fully taxable.

Action to Take –> I see Senior Housing as a long-term holding, especially if you are building a retirement, income-focused portfolio. This doesn’t mean the stock can’t perform well in the short term. Based on favorable long-term demographics and the company’s historic consistency, a 12-month price target of $29 is completely reasonable. Factoring in dividend income, this translates into a 33% total return.

This article was originally written by Adam Fischbaum, and posted on StreetAuthority.