Stockbridge Partners, founded in 2007, is a subsidiary of Berkshire Partners Stockbridge Partners. The fund is run by Robert J. Small and based in Boston, Massachusetts. It manages an equity portfolio whose value went up to $2.08 billion from $1.91 billion during the third quarter. According to our calculations, the fund returned 13.49% in the third quarter from its 13 long positions in companies which had a market-cap of over $1 billion. This return can be different from the actual return posted by the fund, as we do not take into account the short side of the portfolio and other investments, while evaluating the performance.

Our approach reveals interesting facts about hedge funds’ stock picking skills. For instance, there were 659 hedge funds in our database that had at least five stakes in companies worth over $1.0 billion in their 13F portfolio. These hedge funds’ long portfolio managed to deliver an average return of 8.3% during the third quarter whereas S&P 500 ETFs returned only 3.3%.

Stockbridge Partners had 1.52 million shares of TransDigm Group Incorporated (NYSE:TDG) at the end of the second quarter and left the stake unchanged during the third one. Seeing as the stock gained 9.6% between July and September, the value of the position advanced to $440.39 million from $401.65 million. Overall, 42 funds followed by us held shares of TransDigm Group at the end of June, down by three over the quarter. The biggest stake in the company was held by Lone Pine Capital, which reported holding $627.7 million worth of stock as of the end of June. It was followed by Stockbridge Partners with a $401.7 million position. Other investors bullish on the company included Select Equity Group, Third Point, and Blue Ridge Capital. 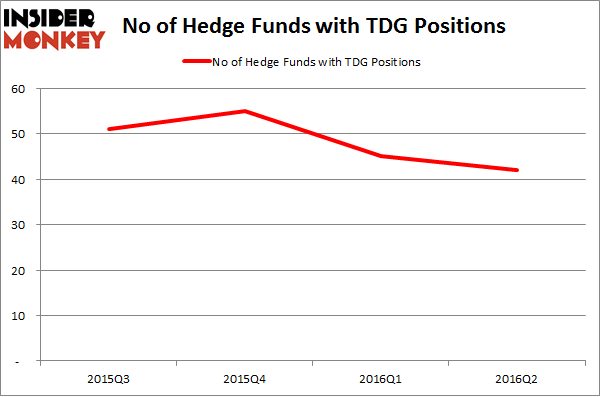 Then there’s SBA Communications Corporation (NASDAQ:SBAC), whose stock inched up by 3.9% in the third quarter, while the fund held 2.05 million shares worth $229.55 million at the end of September, slightly up over the quarter. During the second quarter, the number of funds from our database long SBA Communications Corporations declined by two to 40. More specifically, Farallon Capital was the largest shareholder of SBA Communications Corporation (NASDAQ:SBAC), with a stake worth $318.6 million reported as of the end of June. Trailing Farallon Capital was SPO Advisory Corp, which amassed a stake valued at $251.1 million. Soroban Capital Partners, Stockbridge Partners, and Akre Capital Management also held valuable positions in the company.

Asterias Biotherapeutics Inc (AST) Stock Will Be A Monster Bull!

Cantel Medical Corp. (CMN), ShoreTel, Inc. (SHOR): Are These And Other Stocks...