In the past four to five years, investors have been more squarely focused on the consumer end of the tech landscape, bidding upshares of Apple Inc. (NASDAQ:AAPL), Google Inc (NASDAQ:GOOG), Amazon.com, Inc. (NASDAQ:AMZN) and others. But on the business end of high-tech, the big winners haven’t been such industry leaders. Instead, most gains have come from small, but growing software and data-storage providers. But this theme may be upended in 2013, as one of the most dominant companies in the enterprise space regains its mojo.

I’m talking about Cisco Systems, Inc. (NASDAQ:CSCO), which has had little to show investors during the past five years. 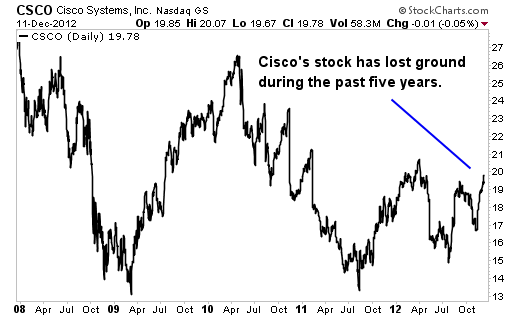 Blocking and tackling
Although the stock chart may give the impression of a company slowly losing relevance, nothing could be further from the truth. Cisco’s operational performance has been quite solid in recent years, especially when compared to stumbling giants such as Hewlett-Packard Company (NYSE:HPQ), Dell Inc. (NASDAQ:DELL), Computer Sciences Corporation (NYSE:CSC), and especially when compared to more direct networking competitors such as Juniper Networks, Inc. (NYSE:JNPR). Consider that Cisco has generated a whopping $46 billion in cumulative free cash flow during the past five years. [This is exactly why StreetAuthority Co-Founder Paul Tracy calls Cisco one of the “World’s Greatest Businesses.”]

But Cisco can be taken to task for being a little too content to simply squeeze out cash from a largely mature business. Indeed, shares fell out of bed in the summer of 2011 simply because investors could no longer see a long-term path to growth. A number of the company’s recent acquisitions had failed to deliver promised growth, and Cisco’s end markets — most notably in government and telecom — weren’t looking all that perky.

Yet in recent quarters, management has begun to talk about a sharper game plan that will likely help solidify Cisco’s role in so many markets. The plan involves a number of small steps that are unlikely to lead to explosive sales growth, but should fuel a steady expansion in profit margins and a more linear trend of profit growth.