In this article I’ve presented four large-cap energy stocks in the Oil & Gas industry that have been outperforming the market YTD while gaining strong upside momentum. Below is the chart showing the YTD comparison for the 4 stocks and the S&P 500, including Concho Resources Inc. (NYSE:CXO), Anadarko Petroleum Corporation (NYSE:APC), EOG Resources, Inc. (NYSE:EOG), and Pioneer Natural Resources (NYSE:PXD). Pioneer led the gains with a +20.60% increase in share priceas of Feb. 11, 2013. 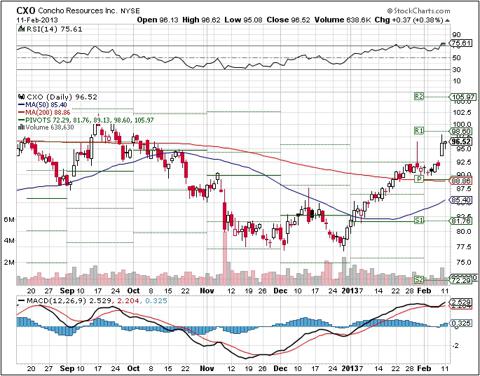 Anadarko Petroleum Corporation is an independent exploration and production company owning over 2.5 billion barrels of oil equivalent of proved reserves. The Company operates in three segments: Oil and gas exploration and production, Midstream, and Marketing. APC closed at $83.47 with a 1.16% loss on Feb. 11, 2013. Anadarko had been trading in the range of $56.42-$88.70 in the past 52 weeks, and the company has a beta of 1.50. 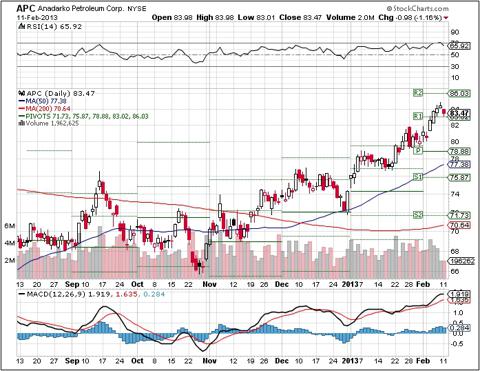 On Feb. 13, 2013, EOG Resources reported a quarterly loss compared with a year-ago profit, as it wrote down the value of Canadian natural gas assets, as reported by Reuters. Excluding items like the $849 million writedown of assets, EOG Resources reported earnings of $1.61 per share, beating Wall Street’s expectation of $1.35 per share. The company also lowered its spending projection to $7 billion-$7.2 billion, which is below its spending of $7.6 billion in 2012, as the company will spend less on “money losing” natural gas drilling.