An article came out toward the end of 2012 highlighting 10 of the fastest growing industries in America.  What are some of the industries, and who is poised to cash in on this growth?  Read on.

You may already know it, but 3D printing is kind of a big deal.  The industry has been growing almost 9% a year since 2002.  But that is a little misleading, because the growth is still gaining momentum.  2012 was a huge year.  This year, estimates call for around 20% industry growth. 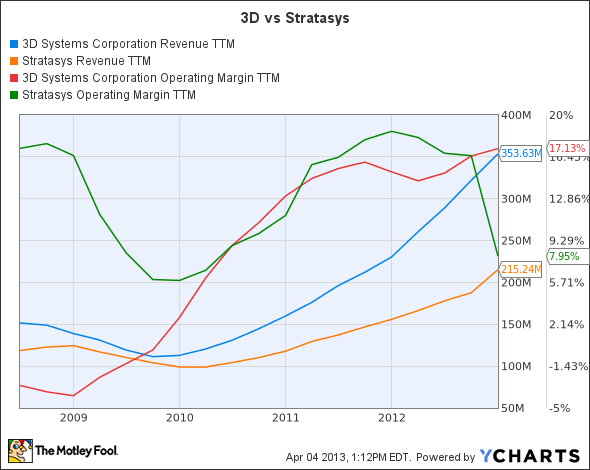 Not all companies are created equal.  Just because a company is doing business in a growing sector does not ensure that they will be a winner. Stratasys, Ltd. (NASDAQ:SSYS) has been facing some headwinds – things like a falling operating margin.  The stock is facing some negative feelings from hedge funds, and has even been downgraded by TheStreet.  However, to be clear, while there is some negative sentiment, the general sentiment was positive in regards to the the most recent earnings report.  Net income was up 40%.  When the company released the quarterly report, shares went soaring.

3D Systems Corporation (NYSE:DDD) seems to run a tighter ship.  Wall Street didn’t like the company’s most recent miss.  But the quarterly report showed that the company had set new records in virtually every category.  In short, business has never been better.  The company is expecting 37% growth this year on the high end.  And thanks to the recent pull back, shares of 3D Systems Corporation (NYSE:DDD) are “cheaper” than those of Stratasys, Ltd. (NASDAQ:SSYS). Its forward p/e is around 24 compared to 30.

What is the future of 3D printing?  From now until 2017, the industry is expected to keep growing at the break-neck speed of 14% a year.  That’s some growth I want to be around.

Getting your higher educational needs taken care of on the internet used to be something that seemed a little shady.  Not so anymore.  Since 2002, online education has been growing over 13% per year.  This past year growth slowed a bit, but many still believe that online education is the direction higher education is going to continue to move.  Consider that the University of Wisconsin is now one of several physical colleges that offer a 100% legit degree without ever having need to step in a classroom.

Apollo Group Inc (NASDAQ:APOL) is one of the better known players in this sector, specifically with its brand the University of Phoenix. 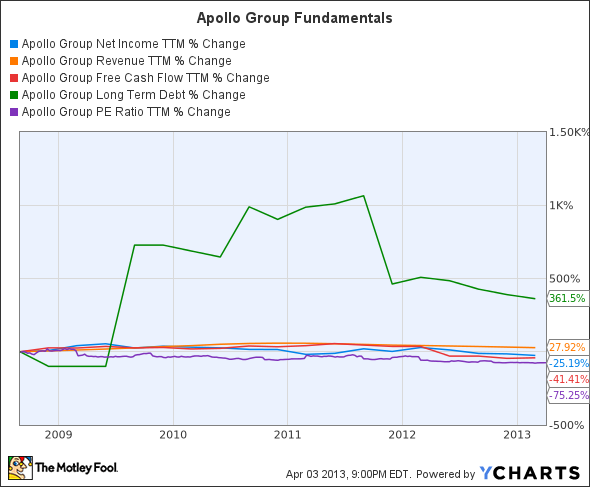 Despite its size and brand recognition, it appears that Apollo Group has lost their way financially speaking.  Despite an industry that is growing 13% a year, during the past five years Apollo has seen revenue barely creep forward, and income has actually gone backwards.  Some will attribute these losses to the number of colleges now offering MOOC:  Massive Open Online Courses.  This slew of new competitors certainly has hit Apollo Group Inc (NASDAQ:APOL).