One of the key goals in tech investing is to focus on dominant companies that sport attractive valuations. There’s even an acronym for it: GARP (growth at a reasonable price). Yet how you define this approach can get tricky. Should you focus on stocks that have extremely low valuations, with perhaps only modest growth prospects? Should you focus on companies that are sporting sizzling growth and robust — but not ridiculously rich — valuations? Or should you try to focus on companies with a mix of solid growth prospects and mid-range valuations?

If you can’t decide, then don’t worry. I’ve found three tech stocks that land into each camp and, if taken together, then they may give you the perfect GARP positioning.

1. Polycom Inc (NASDAQ:PLCM): Cheap and unloved
This maker of video and audio-conferencing equipment has stalled out after a solid growth spurt, which saw sales rise more than 150% to $1.5 billion between 2005 and 2011. The global economic crisis has led enterprises to hold off on new equipment purchases that aren’t seen as vital to ongoing operations. As a result, sales are expected to drop 5% this year and rebound only modestly in 2013.

Yet a flat top line is masking an important change that will affect the company’s bottom line. Polycom is rolling out new products that focus on high-margin software and away from low-margin hardware. As a result, although earnings are likely to be stuck at around 70 cents a share in 2012 and 2013 as the product transition takes hold, they are expected to rise back up to around 90 cents a share in 2014, thanks to expanding profit margins. 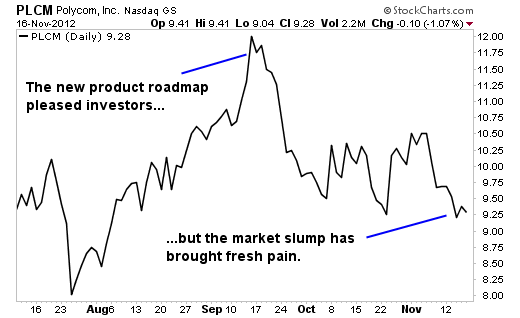 Investors initially applauded these new product plans, but those gains have already evaporated in this tough market.

Until Polycom’s profit picture strengthens, investors can focus on the company’s $630 million net cash balance, which accounts for a hefty 39% of the entire market value of the company.

2. Broadcom Corporation (NASDAQ:BRCM): Good growth and value
This chipmaker seems to be right at the heart of many major tech trends. Its communications chips will be found in a myriad of new devices that will support the next iteration of Wi-Fi, known as 802.11ac. Its systems-on-a-chip approach is enabling smartphone makers to pack a lot of functions into just one semiconductor chip, allowing them to produce smaller smartphones. And the next generation of TV sets will have improved Web-streaming capabilities, with many of them sporting Broadcom chips. Broadcom chips can already found in many of Apple Inc. (NASDAQ:AAPL) best-selling products — the iPhone and iPad.

But investors also note that until the global economy strengthens, spending on consumer devices may be a bit tepid. Moreover, Broadcom must compete heavily on price, so even as sales are expected to rise in the high single-digits in 2012 and 2013, earnings will likely be stuck around $2.90 per share in 2012 and 2013. 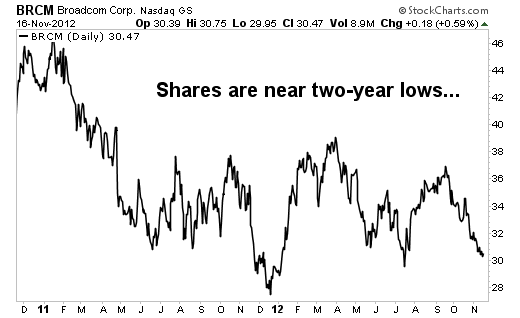 Yet the long-term growth trajectory remains quite bright for Broadcom: The company has hiked spending on research and development efforts this year to more than $2 billion, which should help Broadcom stay on the leading edge as we move into the middle of the decade.

Shares look like a good deal at around 10 times projected 2012 profits.

3. Fusion-IO, Inc. (NYSE:FIO): Scorching growth and healthy valuations
I profiled this fast-growing data-storage supplier in May, and though shares subsequently rallied, they’ve been sucked back down by this tough market. 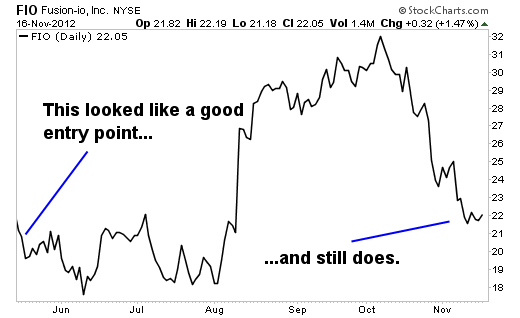 The growth trajectory I mentioned then remains intact. Sales are expected to rise around 50% in fiscal (June) 2013 to about $530 million, and hit $800 million by fiscal 2015, according to Goldman Sachs’ analysts.

As I noted before, Fusion IO had cultivated strong relationships with companies like Apple, Facebook Inc (NASDAQ:FB), International Business Machines Corp. (NYSE:IBM) and others. Now you can add more names to the list: “Partnerships with Cisco Systems, Inc. (NASDAQ:CSCO) and NetApp Inc. (NASDAQ:NTAP) are still in the early Oct. 25, stages, [and] they could become more significant contributors in the second half of thefiscal year,” note Goldman’s analysts.

It’s hard to call this a value play, though the forward price-to-sales multiple has fallen from about six to around four in recent weeks. For a company that has long been rumored to be on the sales block, the recent sharp pullback in shares will surely heighten such speculation.

Action to Take –> Looking past the possible near-term trough, these three tech companies are still very well-positioned for growth as we head into the middle of the decade. And their slumping share prices can be seen as solid entry points for the patient investor.

5 Ways To Get Ahead of the Black Friday Craze
Monthly Newsletter Strategy
Download a free copy of our newsletter and see the details inside!
Hedge Fund Resource Center
Billionaire Hedge Funds