Companies 0 See All
Hedge Funds 0 See All
Insiders 0 See All
Institutional Investors 0 See All
Click here to see all results for Sorry, no results has been found matching your query.
Bitcoin-Ethereum and Other Cryptocurrencies-Macroeconomic Predictions-News-Tech

Published on February 18, 2018 at 2:35 pm by Insider Monkey Staff in Bitcoin, Ethereum and Other Cryptocurrencies, Macroeconomic Predictions, News, Tech

Online dating is big business for publicly-traded Wall Street companies, private firms operating in the space, and small businesses offering ancillary products and services. Researchers at IBISWorld submit that online dating is a $3 billion industry powered by easier access to the Internet, and the proliferation of smartphones such as Apple (AAPL) iPhones and Google’s (GOOGL) Android powered devices.

Many people are looking for love online, and the industry is better for it. There are more than 2,080 businesses in the online dating space and they employ at least 5000 workers. Through 2012 to 2017, the industry has grown by an annual growth rate of 11.2% and economists expect the industry to grow by 5% annually through the next five years. 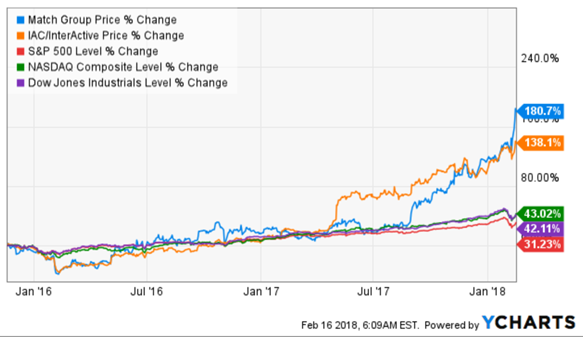 The chart above shows how the stock of two major Wall Street online dating companies have fared in relation to the market within the last five years. From the chart, you’ll observe that Match Group (MTCH) has delivered a 180.7% price gains and IAC/InterActive Corporaion (IAC) has delivered 138.1% price gains within the five years. In contrast, the S&P 500, Dow Jones Industrials, and NASDAQ Composite have delivered 31.23%,42.11%, and 43.02% respectively.

From the foregoing, it is obvious that investors who bought the shares of companies in the online dating industry have had reasons to smile to the banks. However, market sentiments suggest that users are not necessarily living happily ever after with the love of their lives. Many of the top rated online dating services charges a premium (relative to social media networks) to help people find love online. For instance, a monthly subscription on match.com costs $42 and you can expect to pay as much as $60 per month on eHarmony.

Nonetheless, users are plagued by incompatible matches, unresponsive users, outright spammy/creepy messages, and a general waste of time and resources despite the premium paid in monthly subscriptions.

Below are three blockchain solutions working on disrupting the online dating industry by rewarding users with money and compatible dates.

Ponder is a blockchain based online dating platform that believes that humans are better at spotting chemistry and making recommendations/matches for potential partners than AI-powered machines. Ponder is trying to decentralize the online matchmaking process by incentivizing humans to matchmake other people using game mechanics and financial rewards. Online dating despite all the hype is less than perfect – less than 1 in four users find a relationship, 42% of women report harassment, and an investigative journalist reports that “it takes 3000 swipes to maybe, maybe get one person’s ass in the chair across from you” via through the popular Tinder app.

Ponder is creating a platform where you can meet compatible partners that have been recommended by motivated matchmakers, friends, family, or a community that understand the kind of person you want. Matchmakers get to earn $10 for as success fee when two matched people acknowledge that the match is a fit. If the people matched go ahead to the point of getting married, the person that recommended the match with earn $1000.

The gamification of matchmaking activities with financial rewards ensures that matchmakers give serious thought to the matchmaking process; hence, singles will be getting leads from/to highly compatible leads. In addition, matchmakers get to rise through the ranks with a Match rate from level 1 through level 10. Each new Match Rate level has some rewards and additional game features included to keep matchmakers engaged.

Hicky is an interesting blockchain-powered startup that wants to use Blockchain technology to make dating more secure and effective for users by verifying their identity and creating an incentivized community of users.

Trust is the most essential part of a relationship; unfortunately, trust is often missing in many online dating scenarios. The lack of trust in turn makes online dating a needless waste of time, resources and energy. Users of online dating platforms find it hard to be sure that the person messaging them is who they claim to be, that the information that such people provided are accurate. The users are also not sure about the security of their own personal information and whether such information is shared with third parties.

Hicky is working on a solution that prioritizes the privacy of user information and data using a decentralized database where all the user data is encrypted. The firm is also developing a verification procedure with a layered biometric identification process that combines facial recognition with voice scan. Hicky also has a Decentralized Autonomous Dating Mechanism built around its underlying Hicky Token (HKY) to ensure that users are of good behavior.

On the one hand, it is somewhat hard to pinpoint whether the online dating platforms intentionally set their algorithms to push incompatible dates so that you can spend a longer time on their platform.

Secondly, many of the assumptions of matchmaking algorithms (on income, attractiveness, interests, and relationship goals) are often fundamentally flawed. Hence, users often must deal with a barrage of low-quality mass messaging – nobody likes spam. The worst part is that messages from genuinely interested people end up in a cacophony of spam messages and are never read by the recipient.

Luna believes that improving the quality of messaging in the online dating arena could have an exponential influence in increasing the quality of matches and the ensuing relationships from such conversations. Luna is utilizing its Stars token to force users to think deeply about the odds of compatibility before sending a message to potential dates. The fact that sending a message also requires quantity of Star token also forces users to take the time to compose unique messages that are likely to elicit a response instead of copying and pasting the same message to multiple users. Recipients of messages in turn get the Star tokens used to send the message credited to their account when they open and read the messages. Hence, potential dates are incentivized to respond to messages in good time. 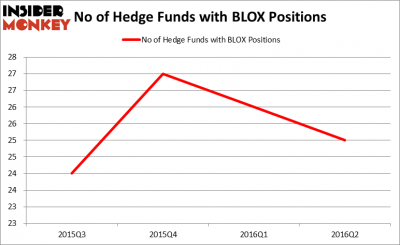 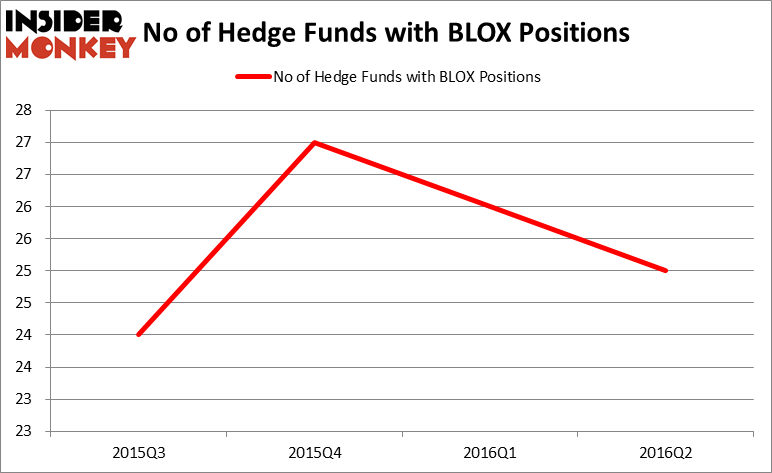 36 Fresh Stories Telling How Is It Going In The Finance World Today?

Is IAC/InterActiveCorp (IAC) a Good Stock to Buy?