It has been a fantastic year for equity investors as Donald Trump pressured Federal Reserve to reduce interest rates and finalized the first leg of a trade deal with China. If you were a passive index fund investor, you had seen gains of 31% in your equity portfolio in 2019. However, if you were an active investor putting your money into hedge funds’ favorite stocks, you had seen gains of more than 41%. In this article we are going to take a look at how hedge funds feel about a stock like Capital One Financial Corp. (NYSE:COF) and compare its performance against hedge funds’ favorite stocks.

Capital One Financial Corp. (NYSE:COF) shares haven’t seen a lot of action during the third quarter. Overall, hedge fund sentiment was unchanged. The stock was in 42 hedge funds’ portfolios at the end of the third quarter of 2019. At the end of this article we will also compare COF to other stocks including The Bank of New York Mellon Corporation (NYSE:BK), ABB Ltd (NYSE:ABB), and Koninklijke Philips NV (NYSE:PHG) to get a better sense of its popularity.

If you’d ask most shareholders, hedge funds are seen as unimportant, outdated investment vehicles of yesteryear. While there are over 8000 funds with their doors open today, We hone in on the elite of this group, around 750 funds. These hedge fund managers handle most of the hedge fund industry’s total capital, and by paying attention to their highest performing equity investments, Insider Monkey has uncovered many investment strategies that have historically outrun the S&P 500 index. Insider Monkey’s flagship short hedge fund strategy outpaced the S&P 500 short ETFs by around 20 percentage points per annum since its inception in May 2014. Our portfolio of short stocks lost 27.8% since February 2017 (through November 21st) even though the market was up more than 39% during the same period. We just shared a list of 7 short targets in our latest quarterly update .

We leave no stone unturned when looking for the next great investment idea. For example Discover is offering this insane cashback card, so we look into shorting the stock. One of the most bullish analysts in America just put his money where his mouth is. He says, “I’m investing more today than I did back in early 2009.” So we check out his pitch. We read hedge fund investor letters and listen to stock pitches at hedge fund conferences. We even check out this option genius’ weekly trade ideas. This December, we recommended Adams Energy as a one-way bet based on an under-the-radar fund manager’s investor letter and the stock already gained 20 percent. Now let’s check out the recent hedge fund action surrounding Capital One Financial Corp. (NYSE:COF).

How have hedgies been trading Capital One Financial Corp. (NYSE:COF)?

At the end of the third quarter, a total of 42 of the hedge funds tracked by Insider Monkey held long positions in this stock, a change of 0% from the previous quarter. The graph below displays the number of hedge funds with bullish position in COF over the last 17 quarters. With the smart money’s sentiment swirling, there exists a select group of key hedge fund managers who were adding to their stakes meaningfully (or already accumulated large positions). 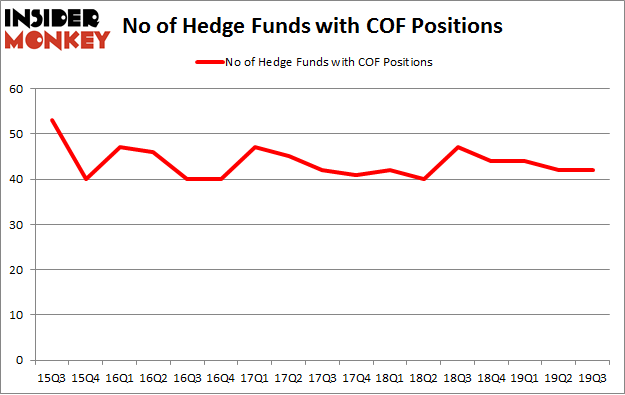 According to publicly available hedge fund and institutional investor holdings data compiled by Insider Monkey, Richard S. Pzena’s Pzena Investment Management has the most valuable position in Capital One Financial Corp. (NYSE:COF), worth close to $501.5 million, amounting to 2.7% of its total 13F portfolio. The second most bullish fund manager is Ken Griffin of Citadel Investment Group, with a $201.1 million position; 0.1% of its 13F portfolio is allocated to the company. Other hedge funds and institutional investors that hold long positions comprise Cliff Asness’s AQR Capital Management, Steve Cohen’s Point72 Asset Management and Peter Rathjens, Bruce Clarke and John Campbell’s Arrowstreet Capital. In terms of the portfolio weights assigned to each position Tegean Capital Management allocated the biggest weight to Capital One Financial Corp. (NYSE:COF), around 9.74% of its 13F portfolio. Second Curve Capital is also relatively very bullish on the stock, dishing out 5.14 percent of its 13F equity portfolio to COF.

Seeing as Capital One Financial Corp. (NYSE:COF) has faced declining sentiment from the aggregate hedge fund industry, we can see that there exists a select few fund managers who were dropping their positions entirely last quarter. At the top of the heap, Zach Schreiber’s Point State Capital cut the largest investment of the “upper crust” of funds watched by Insider Monkey, totaling close to $84.4 million in stock, and Ari Zweiman’s 683 Capital Partners was right behind this move, as the fund dumped about $22.3 million worth. These moves are interesting, as total hedge fund interest stayed the same (this is a bearish signal in our experience).

As you can see these stocks had an average of 21.5 hedge funds with bullish positions and the average amount invested in these stocks was $1739 million. That figure was $1937 million in COF’s case. The Bank of New York Mellon Corporation (NYSE:BK) is the most popular stock in this table. On the other hand Koninklijke Philips NV (NYSE:PHG) is the least popular one with only 7 bullish hedge fund positions. Capital One Financial Corp. (NYSE:COF) is not the most popular stock in this group but hedge fund interest is still above average. Our calculations showed that top 20 most popular stocks among hedge funds returned 41.1% in 2019 through December 23rd and outperformed the S&P 500 ETF (SPY) by 10.1 percentage points. Hedge funds were also right about betting on COF, though not to the same extent, as the stock returned 38.6% during 2019 (as of 12/23) and outperformed the market as well.