2019 Review: Most Favored Hedge Fund Stocks vs. Jack in the Box Inc. (JACK)

Is Jack in the Box Inc. (NASDAQ:JACK) a bargain? Prominent investors are reducing their bets on the stock. The number of bullish hedge fund bets fell by 4 lately. Our calculations also showed that JACK isn’t among the 30 most popular stocks among hedge funds (click for Q3 rankings and see the video at the end of this article for Q2 rankings).

We leave no stone unturned when looking for the next great investment idea. For example Europe is set to become the world’s largest cannabis market, so we check out this European marijuana stock pitch. We read hedge fund investor letters and listen to stock pitches at hedge fund conferences. This December, we recommended Adams Energy as a one-way bet based on an under-the-radar fund manager’s investor letter and the stock is still extremely cheap despite already gaining 20 percent. Keeping this in mind we’re going to take a look at the key hedge fund action regarding Jack in the Box Inc. (NASDAQ:JACK). 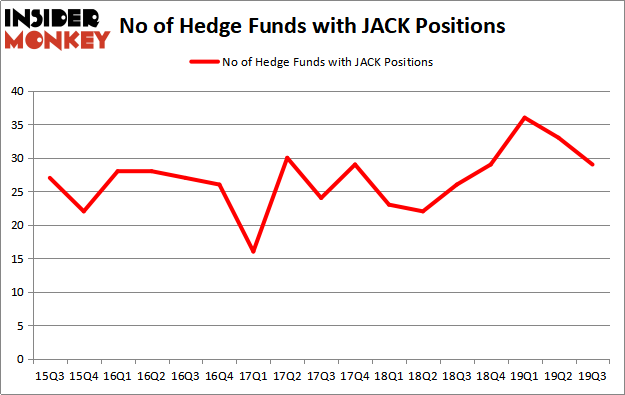 When looking at the institutional investors followed by Insider Monkey, Millennium Management, managed by Israel Englander, holds the number one position in Jack in the Box Inc. (NASDAQ:JACK). Millennium Management has a $113.2 million position in the stock, comprising 0.2% of its 13F portfolio. Coming in second is JANA Partners, managed by Barry Rosenstein, which holds a $71.9 million position; 5.8% of its 13F portfolio is allocated to the company. Some other hedge funds and institutional investors with similar optimism include Ken Griffin’s Citadel Investment Group, Dmitry Balyasny’s Balyasny Asset Management and Paul Marshall and Ian Wace’s Marshall Wace. In terms of the portfolio weights assigned to each position JANA Partners allocated the biggest weight to Jack in the Box Inc. (NASDAQ:JACK), around 5.8% of its 13F portfolio. Shellback Capital is also relatively very bullish on the stock, designating 2.48 percent of its 13F equity portfolio to JACK.

Judging by the fact that Jack in the Box Inc. (NASDAQ:JACK) has experienced a decline in interest from the smart money, we can see that there is a sect of hedgies that slashed their positions entirely in the third quarter. At the top of the heap, Robert Pohly’s Samlyn Capital cut the largest stake of the “upper crust” of funds tracked by Insider Monkey, comprising close to $40.8 million in stock, and Lee Ainslie’s Maverick Capital was right behind this move, as the fund cut about $16.6 million worth. These bearish behaviors are interesting, as total hedge fund interest dropped by 4 funds in the third quarter.

As you can see these stocks had an average of 10.25 hedge funds with bullish positions and the average amount invested in these stocks was $118 million. That figure was $479 million in JACK’s case. LivePerson, Inc. (NASDAQ:LPSN) is the most popular stock in this table. On the other hand Grupo Aeroportuario del Centro Nort (NASDAQ:OMAB) is the least popular one with only 7 bullish hedge fund positions. Compared to these stocks Jack in the Box Inc. (NASDAQ:JACK) is more popular among hedge funds. Our calculations showed that top 20 most popular stocks among hedge funds returned 41.3% in 2019 and outperformed the S&P 500 ETF (SPY) by 10.1 percentage points. Unfortunately JACK wasn’t nearly as popular as these 20 stocks and hedge funds that were betting on JACK were disappointed as the stock returned 2.5% in 2019 and trailed the market. If you are interested in investing in large cap stocks with huge upside potential, you should check out the top 20 most popular stocks among hedge funds as 65 percent of these stocks outperformed the market in 2019.