20 Most Depressed and Suicidal Countries in the World

There is a strong relationship between depression and suicide rates. In America, suicide rates are higher in less populated, less wealthy areas. Firearms are often the means to end one’s life. Men are four times as likely to commit suicide in America. It’s a similar ratio (3.5 to 1) around the world. Insider Monkey, your source for free insider trading data, gathered the suicide rates from the World Health Organization and ranked countries based on their suicide rates. Not all countries report suicide rates, and not all reports are accurate (most countries under-report). As a result, the list of countries with the least suicide rates is very inaccurate, and we won’t be presenting it.

Here are the 20 most depressed and suicidal countries in the World: 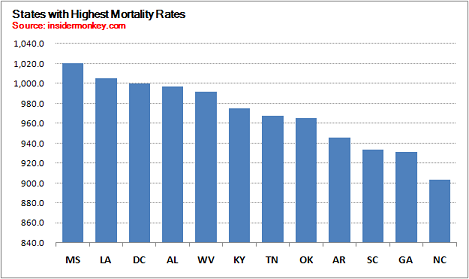 12 Deadliest States With The Highest Mortality RatesMark Madoff Suicide – RIP Mark, You Deserved To Have Been Taught Self...10 Best and Worst States for Illegal Aliens

Top 20 States With the Highest Income Per Capita Growth Rates

Top 10 States with the Worst per Capita Income Growth Rates

The Secret List of the 10 Wealthiest States in America

The 10 States That Got The Most Wealthy, Yet Still Demanded a Federal Bailout

Pie Chart of the Day: Wealth Distribution By State

Population By State: Only 10 States Are More Populous Than New York City

10 States Where Obesity Rates Are Skyrocketing

Top 10 States With The Highest Obesity Rates in America