In this article, we are going to talk about the 20 best social media apps in 2021 basing on various metrics and data to back the ranking of these apps. You can skip our comprehensive analysis on the social media industry and go directly to 5 Best Social Media Apps in 2021.

Social media apps mainly have user-generated content such as texts, posts or comments, digital photos or videos. The data generated through all online interactions among users is regarded as the lifeblood of social media. Social media allows users to keep in touch with their relatives and friends. Furthermore, individuals and organizations also utilize social media platforms for marketing and networking purposes for their brand, products or services. Moreover, it also allows people to find various career opportunities, connect with like-minded people across the globe and share their interests, thoughts, feelings, ideas and insights online.

In recent years, there has been a significant rise not only in the number of these social media apps but also in the usage of social media apps. Facebook, Inc. (NASDAQ: FB) is the largest social media app in the world, with 2.4 billion users worldwide. In comparison, the other social media apps are way behind Facebook, Inc. (NASDAQ: FB). However,  social media platforms like YouTube and WhatsApp (also owned by Facebook) also have more than 1 billion users each. These numbers of social media users are significant considering the fact that there are 7.7 billion people in the world, with at least 3.5 billion people using the internet. This means social media platforms are used by one in three people in the world and more than two-thirds of all internet users. The change caused by social media in society cannot be ignored. The rapid and vast adoption of these technologies around the world is changing how people find partners, how people access information, get news, and engage in social movements, raise awareness on social and environmental issues. For example, over the course of several years, Twitter Inc. (NYSE: TWTR) has become a primary news source and engagement channel for political debates for millions of people around the world.

Apps like Facebook (NASDAQ: FB), YouTube, WhatsApp, WeChat and Instagram, Twitter Inc. (NYSE: TWTR), Tumblr and TikTok are seeing a spectacular rise in popularity. Each app has its peculiar customer base. According to the research of Pew Research Center, around 7 in 10 Americans use social media apps for connecting with one another, engaging with the news content, sharing information and for entertainment purposes.

Now let us look at the 20 best social media apps in 2021 based on their popularity and the number of active monthly users. 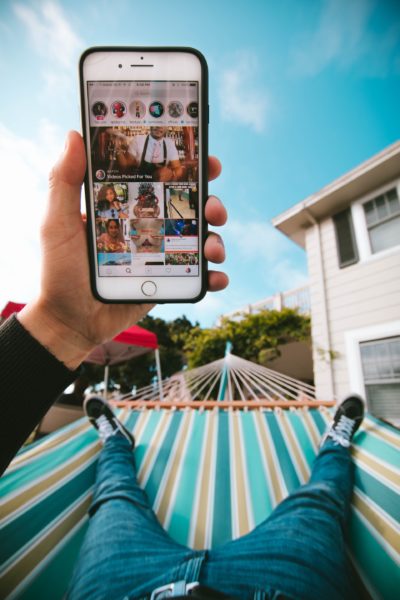 Photo by geo uc on Unsplash

Reddit allows users to post, comment on and vote on content. It’s the most famous social media forum in the world. The voting determines whether a piece of content moves up or down, which is ultimately organized based on the areas of interest (known as subreddits). Currently, Reddit’s active users per month count is approximately 100 million.

Telegram is an instant messaging network similar to WhatsApp and is available across platforms in more than eight languages. However, Telegram has always focused more on the privacy and security of the messages sent over the internet by using its platform. It empowers users to send messages that are encrypted and self-destructive. The app has approximately 100 million active users per month.

LinkedIn is owned by Microsoft Corporation (NASDAQ: MSFT) and is easily one of the most popular professional social networking sites or apps and is available in over 20 languages. It is used across the globe by all types of professionals and serves as an ideal platform to connect with different businesses, locate and hire ideal candidates, and more. It boasts over 400 million members and has 100 million active users per month.

Pinterest Inc. (NYSE: PINS) is a photo-sharing and visual bookmarking social media app that enables users to find new ideas for their projects and save them. Pinterest is famous for its infographics, charts, images that users can “pin” on their “boards.” Millions of people share DIY projects, design ideas, information, knowledge, art and other projects on the app. Currently, the app has 100 million active users per month.

The VK social media app is owned by Mail.ru Group Limited (OTC: MLRYY), a Russian internet company. VK is one of the largest social networking platforms in Russia and has quite similar features to Facebook. VK has 100 million active users per month.

The YY social media app is owned by JOYY Inc. (NASDAQ: YY), a Chinese company. YY is a major video-based social networking platform in China that enables group video chats. In such chats, more than 100,000 members can watch a single person doing an activity. Such an activity can be anything from giving a tutorial video to singing karaoke. Currently, YY has 122 million active users per month, making it the fifteenth most popular social media app of 2021.

Snapchat is a popular social media app that was released in 2011. This image messaging social platform enables users to chat with their friends by using pictures. It allows users to explore news and even check out live stories that are happening around the world. The current number of active users per month of Snapchat is 200 million.

Naver Corporation (KSE: 035420) is the owner of the social media app LINE, which is a messaging social network that enables users to share photos, videos, text messages and even audio messages or files. In addition, it allows the users to make voice and video calls at any time of the day. Currently, the number of active users per month of the LINE app is 215 million.

Sina Corporation (NASDAQ: SINA) owns the Sina Weibo app. This is a highly popular microblogging social platform in China that is known for its hybrid mix of Twitter’s and Facebook’s features. The current number of active users of the Sina Weibo social media app per month is 222 million.

In 2014 the Rakuten Group, Inc. (OTC: KUNY) bought Viber, a multi-lingual social media platform, which is available in more than 30 languages. It is known for its instant text messaging and voice messaging capabilities. The users can also share photos, videos, and audio messages, using Viber. It offers the users the ability to call to non-Viber users through a feature named Viber Out. The current number of active users per month of Viber is 249 million.

In 2011 the Microsoft Corporation (NASDAQ: MSFT) took ownership of the Skype social media app. It is one of the most popular communication-based social networking platforms. It allows the users to connect with people through voice calls, video calls (using a webcam) and text messaging. Furthermore, the users can even conduct group conference calls. It allows Skype-to-Skype calls for free allowing users to communicate with anyone, located in any part of the world, over the internet. The current number of active users per month of Skype is 300 million.

Offered by Baidu, Inc. (NASDAQ: BIDU) of China, the search engine company, the app Baidu Tieba is the social forum network based on the keyword searches in the Baidu search engine. This discussion forum works on the unique concept of allowing you to create a social network group for a specific topic, using the search, or even to join an existing online social group. This is the ninth most popular social media app in the world, with 300 million active users per month.

Twitter is one of the most popular social media apps in the world. It is used by famous celebrities and politicians and remains a primary sources for news articles.  Furthermore, the trending topic feature of the app allows people to talk about popular topics, the latest news and events with the “#” symbol that is used with a word or a sentence to make it a trending topic.  It is the 8th most popular app in 2021, with 320 million active users per month.

Instagram was launched in 2010 as a unique social networking platform that was completely based on sharing photos and videos. This photo-sharing social networking app thus enables the users to capture the best moments of their lives with their phone cameras or digital cameras and post them on the app. Instagram was bought by Facebook, Inc. (NASDAQ: FB) in 2019, and it is now part of the Facebook (NASDAQ: FB) empire joining the family of other apps like WhatsApp. Instagram is the seventh most popular social media app in the world, having 400 million active users per month.

Tumblr serves as a social media and a microblogging platform that can be used to find and follow things that are of your interests. It is also used for posting anything, including multimedia, to a short-form blog. Moreover, it gives the user the flexibility of customizing almost everything on their profile. Still, this is the sixth most popular social media app in 2021, with 555 million active users per month. Yahoo!, which is owned by Verizon Communications Inc. (NYSE: VZ), bought Tumblr in a $1.1 billion deal in 2013. But in 2019, it was reported that Verizon planned to sell Tumblr to the parent company of WordPress for just $10 million.

Disclosure: None. 20 Best Social Media Apps in 2021 is originally published on Insider Monkey.

Is DISCA Stock A Buy or Sell?

Is CNMD Stock A Buy or Sell?

Is EAT Stock A Buy or Sell?

Is SBNY Stock A Buy or Sell?

Is OPEN Stock A Buy or Sell?

Is CACI Stock A Buy or Sell?
Monthly Newsletter Strategy
Download a free copy of our newsletter and see the details inside!
Hedge Fund Resource Center
Lists

10 Most Conservative Major Cities in the United States

5 Most Conservative Major Cities in the United States

5 Best Companies To Work For