The results of  Zynga Inc (NASDAQ:ZNGA) earnings are out, so we thought we’d take the opportunity elaborate on what management expects from the company’s future. We won’t focus on the valuation here, as valuation is now just a “hope strategy.” Instead, we will focus on the important catalysts going forward and our take on the possible turnaround of the company.

Here is a quick rundown of the pre-announcement: Zynga pre-announced Q3-2012 results and lowered FY2012 guidance primarily due to weakness in its desktop catalog titles and expected delays in launching pipeline titles. EBITDA (earnings before interest, taxes, depreciation, and amortization) is expected to be $147-$162 million, below the prior estimate of $180-$250 million issued in July. What was surprising was that the company is taking a $85-$95 million charge related to OMGPOP, which was acquired in March for $180 million. CEO Mark Pincus stated that “The third quarter of 2012 continued to be challenging and, while many of our games performed to plan, as a whole we did not execute to our satisfaction.” Additionally, Zynga stated that they plan to reduce costs in Q4, details of which are yet to be announced. All in all, it’s really the top line growth, which will add to recovery and not last minute cost cuts. We would have been more encouraged if the cost cutting happened a while back.

1) Continued departure of top talent: The loss of key employees is an on-going risk for the company. Zynga has already lost about 13 employees, which only leads to a loss of morale for the current employees. Zynga is surrounded by silicon valley firms that could attract talent from Zynga. Who else will leave?

2) Nature of cost cutting in Q4 and beyond: We would like to get more details on the nature of cost reductions and the timeline for these cost cuts. Zynga will need to react quickly given that the competitive landscape is getting tougher by the day,

3) Future on Facebook Inc (NASDAQ:FB): Zynga is a large customer of Facebook. FB charges Zynga a fee to use its network for consumers to play its games. A shift of usage on FB from desktop to mobile has been hurting Zynga, and it would be important to see the company’s progress in developing a successful mobile gaming business,

4) Cash provides short-term support: Zynga ended its second quarter with $1.6 billion in liquidity with a mere $100 million in long-term debt, giving it a net cash position of $1.5 billion. It will be important to see the use of cash going forward. We only hope for an end of expensive acquisitions.

Conclusion: It’s pretty clear that there is no short-term solution to improve the fundamentals. The only saving grace is the company’s strong liquidity position. Maybe its time for a restructuring of the company including management before it’s too late.

The chart below compares share performance over the past year. “E”s mark earning reports. 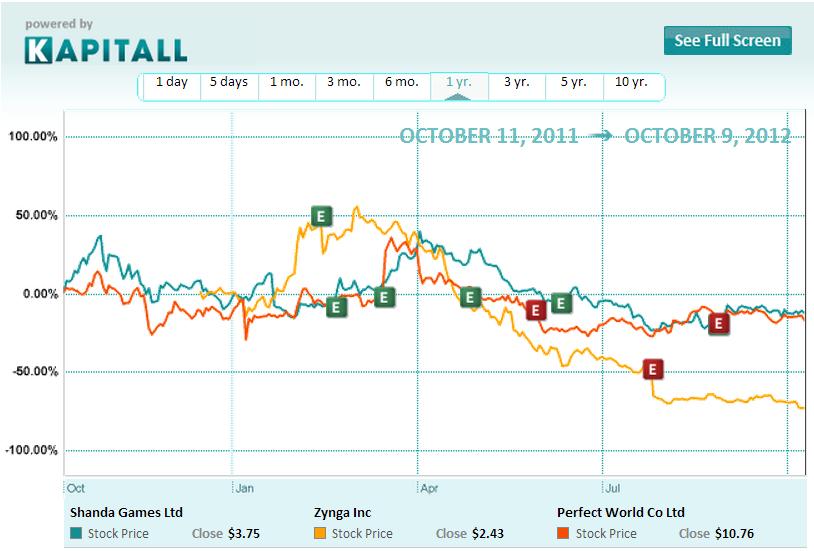 Dunkin Brands: Does The Valuation Seem Neutral From Here?