Zynga Inc (ZNGA): What Investors Should Do Next

Last month, Zynga Inc (NASDAQ:ZNGA) reported that it has reduced its workforce to pre-IPO levels: a move that reduces its headcount by 18% and promises to save the company between $70 million and $80 million annually. This reduction in the workforce comes in the wake of Zynga Inc (NASDAQ:ZNGA) updating its second-quarter earnings guidance to allow for a greater loss of $0.04-$0.03 per share than previously anticipated loss of $0.03 per share.

These recent events speak of the troubles Zynga Inc (NASDAQ:ZNGA) has faced in transitioning from a desktop-based gaming platform to a mobile platform that would allow inroads into the sphere of mobile gaming. The rate of change within gaming does not allow for this transition to occur overtime, but rather must take hold in the immediate future before rivals such as Electronic Arts Inc. (NASDAQ:EA) steal Zynga’s fire and top position in the social-gaming sector.

Zynga’s rise to dominance and current downturn is rooted within its largest asset — Farmville on Facebook. Although the company launched subsequent games, they existed on the desktop and were not able to transition profitably to mobile. Zynga Inc (NASDAQ:ZNGA) is in a position of weakness and ultimately has come to face a reality where profitability is nearly impossible to achieve. For traders, there may still be life in Zynga, but for investors, the question must be asked: “Would you buy the stock now?” The answer is undoubtedly no from a long-term perspective. 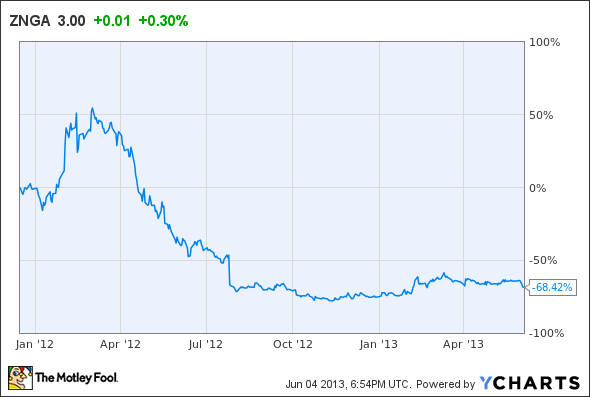 For those reading that have a position in Zynga Inc (NASDAQ:ZNGA), the two questions that must be raised are:

The answer to these questions are difficult to unpack fully, but all signs point to a company that is faltering and ultimately may never return to profitability. CEO Mark Pincus calls this a “transition” for Zynga and describes the company’s current trouble by saying:

The scale that served us so well in building and delivering the leading social gaming service on the Web is now making it hard to successfully lead across mobile and multiplatform, which is where social games are going to be played.

The company, however, has not been able to put forth a comprehensive plan that will transition the company from a web-based gaming platform to that of a mobile and multi-platform.

The next earnings release will, without doubt, show a continuation of the trend that has dominated Zynga. In the previous quarter, monthly users were down and revenue declined 18% year-over-year. This illustrates the difficulty that Zynga is having in building a profitable enterprise, but more so, it shows an ominous future.

Zynga Inc (NASDAQ:ZNGA) should be putting forth a comprehensive gaming and operating plan that does more than cut costs through closing its New York, Dallas, and Los Angeles offices, but rather shows how profitability will be reached and how inroads into a profitable mobile strategy will commence. This has simply not occurred.