Every investor can appreciate a stock that consistently beats the Street without getting ahead of its fundamentals and risking a meltdown. The best stocks offer sustainable market-beating gains, with improving financial metrics that support strong price growth. Let’s take a look at what Ford Motor Company (NYSE:F)‘s recent results tell us about its potential for future gains.

What the numbers tell you
The graphs you’re about to see tell Ford’s story, and we’ll be grading the quality of that story in several ways.

Growth is important on both top and bottom lines, and an improving profit margin is a great sign that a company’s become more efficient over time. Since profits may not always reported at a steady rate, we’ll also look at how much Ford’s free cash flow has grown in comparison to its net income.

A company that generates more earnings per share over time, regardless of the number of shares outstanding, is heading in the right direction. If Ford’s share price has kept pace with its earnings growth, that’s another good sign that its stock can move higher.

Is Ford managing its resources well? A company’s return on equity should be improving, and its debt-to-equity ratio declining, if it’s to earn our approval.

Healthy dividends are always welcome, so we’ll also make sure that Ford’s dividend payouts are increasing, but at a level that can be sustained by its free cash flow.

By the numbers
Now, let’s take a look at Ford’s key statistics: 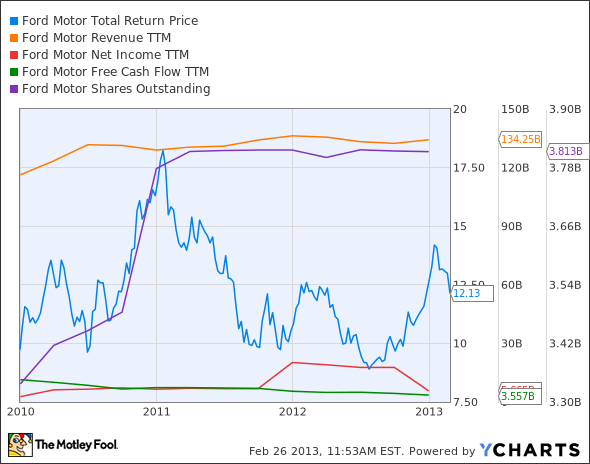 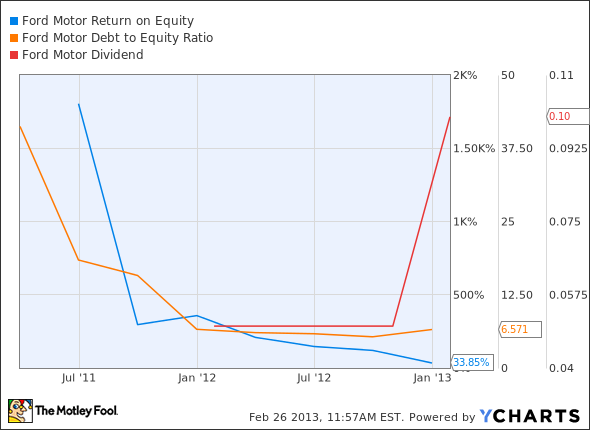 How we got here and where we’re going
Ford’s still rather fresh off a solid earnings report that nevertheless caused a bit of investor fright. Six of nine passing grades indicate that those fears may be somewhat overstated, but it’s worth noting a steep drop in Ford’s free cash flow, which could be cause for concern if that metric remains significantly below its net income. At present, the trailing 12-month discrepancy is nearly $2 billion in favor of net income, which is a complete turnaround from where Ford stood at the start of 2010. Return on equity, while showing a big decline, is skewed by Ford’s fairly recent return to positive shareholder equity levels, and should normalize the next time we examine it. The question remains: Will Ford be able to improve its three failing grades next year?

One show of strength for Ford’s future is a great start to the sales of its newest-model Fusion sedan, which could become a category leader in an auto segment long dominated by Toyota (NYSE:TM)‘s Camry and Honda (NYSE:HMC)‘s Accord. Ford’s overall sales were actually up more year over year in January than either General Motors (NYSE:GM) or Chrysler‘s sales, with a 22% gain against the other two of the Big Three’s identical 16% gain. Even better, Ford continues to show strength in China, and every inroad the company can pave will be another advantage over its multinational rivals. A recently launched Chinese-built SUV called the Kuga could take the fight to Chinese segment leaders Volkswagen and Honda, and their popular Tiguan and CR-V models. If Ford’s learned its lesson from previous model launch problems elsewhere, the Kuga should be set for success.

Other things in Ford’s favor are its commitment to electric and hybrid vehicles and its renewed commitment to paying an industry-leading dividend. Fuel efficiency is a big concern for new-car buyers, and Ford’s put its weight behind all manner of efficiency improvements, which includes the EcoBoost engine as well as an electric Focus and the C-MAX hybrid. Ford insiders see a massive untapped market — they say 60% of new-car buyers consider a plug-in electric hybrid — and its strategy is one built for the biggest payoff years down the road. And in terms of its dividend, Ford’s current free cash flow payout ratio is a perfectly manageable 21.5%, strong enough to attract yield-seekers but not so onerous that Ford would need to cut back in the event of a business downturn.

There are plenty of reasons for Ford to expect better scores next year. What do you think? Automakers are a cyclical bunch, and even the strongest is highly susceptible to economic forces. However, few have the strength and profitability of today’s Ford to back them up if things might take a turn for the worse.

Putting the pieces together
Today, Ford has many of the qualities that make up a great stock, but no stock is truly perfect. Digging deeper can help you uncover the answers you need to make a great buy — or to stay away from a stock that’s going nowhere.

The article Is Ford Destined for Greatness? originally appeared on Fool.com.

Fool contributor Alex Planes holds no financial position in any company mentioned here. Add him on Google+ or follow him on Twitter, @TMFBiggles, for more insight into markets, history, and technology.The Motley Fool recommends Ford and General Motors and owns shares of Ford.