We at Insider Monkey have gone over 700 13F filings that hedge funds and prominent investors are required to file by the SEC The 13F filings show the funds’ and investors’ portfolio positions as of September 30th. In this article, we look at what those funds think of Zuora, Inc. (NYSE:ZUO) based on that data.

Zuora, Inc. (NYSE:ZUO) shares haven’t seen a lot of action during the third quarter. Overall, hedge fund sentiment was unchanged. The stock was in 15 hedge funds’ portfolios at the end of the third quarter of 2018. At the end of this article we will also compare ZUO to other stocks including SeaDrill Limited (NYSE:SDRL), Brooks Automation, Inc. (NASDAQ:BRKS), and DDR Corp (NYSE:DDR) to get a better sense of its popularity.

According to most stock holders, hedge funds are viewed as worthless, outdated investment vehicles of years past. While there are over 8,000 funds in operation at the moment, We choose to focus on the elite of this club, approximately 700 funds. It is estimated that this group of investors control most of all hedge funds’ total capital, and by keeping an eye on their inimitable investments, Insider Monkey has unearthed many investment strategies that have historically outstripped the broader indices. Insider Monkey’s flagship hedge fund strategy outpaced the S&P 500 index by 6 percentage points annually since its inception in May 2014 through early November 2018. We were able to generate large returns even by identifying short candidates. Our portfolio of short stocks lost 24% since February 2017 (through December 3rd) even though the market was up nearly 23% during the same period. We just shared a list of 11 short targets in our latest quarterly update. 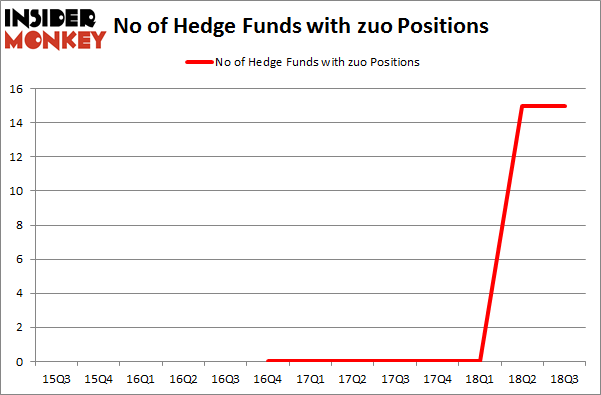 Since Zuora, Inc. (NYSE:ZUO) has faced declining sentiment from the entirety of the hedge funds we track, it’s easy to see that there lies a certain “tier” of funds that slashed their full holdings in the third quarter. Intriguingly, Nehal Chopra’s Ratan Capital Group cut the largest stake of the 700 funds followed by Insider Monkey, worth close to $7.6 million in stock. Jack Ripsteen’s fund, Potrero Capital Research, also dropped its stock, about $4.1 million worth. These bearish behaviors are important to note, as aggregate hedge fund interest stayed the same (this is a bearish signal in our experience).

As you can see these stocks had an average of 14.25 hedge funds with bullish positions and the average amount invested in these stocks was $288 million. That figure was $94 million in ZUO’s case. SeaDrill Limited (NYSE:SDRL) is the most popular stock in this table. On the other hand PriceSmart, Inc. (NASDAQ:PSMT) is the least popular one with only 9 bullish hedge fund positions. Zuora, Inc. (NYSE:ZUO) is not the most popular stock in this group but hedge fund interest is still above average. This is a slightly positive signal but we’d rather spend our time researching stocks that hedge funds are piling on. In this regard SDRL might be a better candidate to consider a long position.