According to geological surveys, the Middle Eastern nation of Israel has potentially game-changing reserves of petroleum and natural gas right off its shores. There are signs that even more natural gas could be in those reserves than initially thought.  Israel’s natural gas is a large economic and strategic factor for the country, as well as for investors – after all, these reserves are thought to be some of the largest proven reserves in the world. Zion Oil & Gas, Inc. (NASDAQ:ZN) is one company seeking to find economically recoverable petroleum and natural gas in Israel. Should investors consider adding Zion Oil & Gas in their portfolio as a play on Israel’s natural gas finds? Zion Oil & Gas, Inc. (NASDAQ:ZN) is not a strong, viable company at this point; there is no compelling reason to jump on the ship at this point. Three stronger alternatives to profit off of Israel’s energy revolution would be Delek US Holdings, Inc. (NYSE:DK), Noble Energy, Inc. (NYSE:NBL), and Woodside Petroleum. Overall, Zion Oil & Gas pales in comparison to these three stocks and is definitely not a “kosher” investment.

According to the company’s website, Zion Oil & Gas, Inc. (NASDAQ:ZN) was founded in April 2000 by John Brown in order to obtain a small onshore petroleum license from the Israeli government. The company was founded on good moral principles, and Brown supposedly has strong business experience from before the founding of Zion. The website makes an interesting note:

“As of March 31, 2013, we have no revenues or operating income and are considered to be a ‘development stage’ company…We hold three petroleum exploration licenses…covering approximately 218,000 acres of land in onshore northern Israel…Exploration for oil and gas in the deep formations of Northern Israel (i.e. 13,500 feet +), is still in its infancy…exploration risks are inherently very high but Zion is working diligently to find substantial quantities of oil and/or gas onshore in Israel.”

Basically, the company has no revenue whatsoever and has not found any oil in its relatively small and difficult onshore holdings. The large reservoirs of oil and natural gas discussed earlier are off of Israel’s shore.

Zion in comparison to stronger companies

In order to fully comprehend the scope of Zion Oil & Gas, Inc. (NASDAQ:ZN)’s futile efforts so far, take a look at the company’s stock performance since Zion first went public on January 3, 2007: 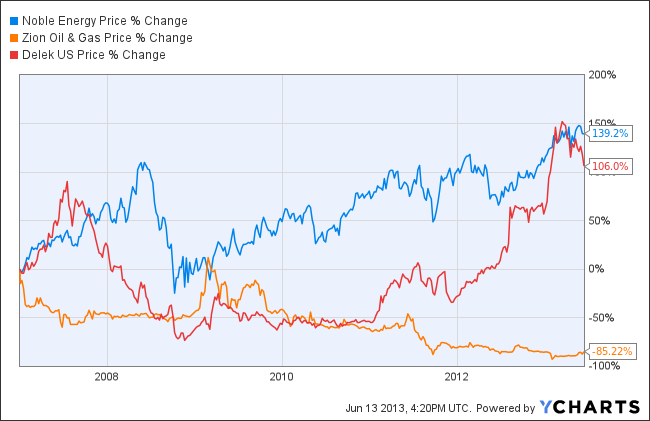 Zion Oil & Gas, Inc. (NASDAQ:ZN) stock has lost a staggering 85% of its value since its Initial Public Offering (IPO), while both Delek US Holdings, Inc. (NYSE:DK) and Noble Energy, Inc. (NYSE:NBL) have appreciated well over 100%. Zion did not have the fundamentals to back up its IPO stock price, and that is reflected in the stock’s miserable performance. The company is simply living in a dream that one day, it might possibly find oil and gas reserves in its holdings, while it continues to drill away in a quite difficult and economically expensive land. This pie-in-the-sky dream might someday come to fruition, but as of now, there is no fulfillment to Zion’s promises to shareholders. That’s not to say that Zion won’t ever be a good investment – all indicators do show, however, that in five years, Zion will most likely still be a “five years from now” type of story.

In contrast, Zion’s competitors not only have proven oil reserves, but have been delivering on their promises and producing actual results. Delek is one of Israel’s largest companies and is a much more diversified investment than Zion Oil & Gas. Delek is not only involved in energy, but also has large operations in infrastructure and electricity, car manufacturing, and insurance and financial services. Delek has large stakes in actual petroleum and gas finds that have been confirmed. Consider Delek’s latest financial report from the first quarter of 2013. Delek crushed analyst estimates and raked in $2.32 billion of revenue. This shows that Delek has been able to crank out solid growth.