Buying stocks near their all-time or 52-weeks lows isn’t always a smart bet. There’s usually good reason when a stock has fallen, and expecting it to go back up “just because it’s been up” before is no sure thing. On the other hand, there’s plenty of evidence that winners keep on winning. Here are four stocks that are up more than 100% so far in 2013. Are they primed to move even higher or running out of rocket fuel? Let’s take a closer look. 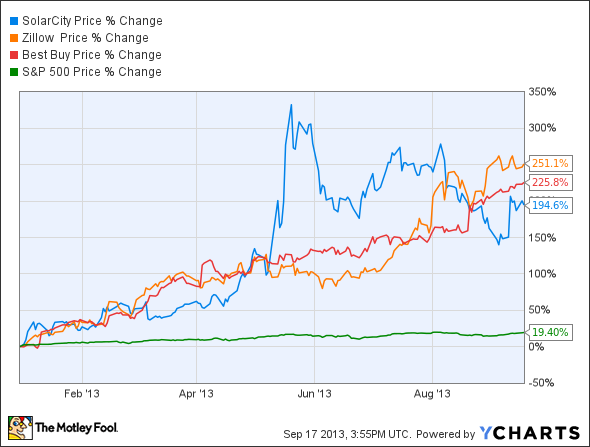 As you can see from the chart, all three companies have crushed the market this year, and that’s about all they have in common. Zillow Inc (NASDAQ:Z) and SolarCity Corp (NASDAQ:SCTY) are both young companies, but operate in completely different worlds. Best Buy Co., Inc. (NYSE:BBY) may have survived the fight for its life, but its relevance is another matter entirely.

Everything housing under one roof

Realtors, rental agencies, and mortgage companies all want to be in front of as many customers as possible, and homebuyers and renters want to find the ideal home — already a stressful process — as easily and simply as possible. Zillow Inc (NASDAQ:Z)’s platform has become a strong draw for both homebuyers and renters alike, creating a powerful network effect that benefits all parties.

Back in August I discussed how Zillow Inc (NASDAQ:Z) has consistently increased both the number of visitors and the engagement of those visitors on its website, and focus on continuing this growth has taken center stage. This past quarter, the company spent $32.9 million on sales and marketing, nearly three times more than the year-ago quarter. And while this large spend meant Zillow Inc (NASDAQ:Z) moved from a GAAP profit to a loss, investors need to keep the long-term goal in mind. CEO Spencer Rascoff, from the earnings press release:

We’re executing to the long game and making great progress against our strategic priorities to grow audience and gain market share, grow our Premier Agent business, and grow our emerging marketplaces. We’ve seen substantial audience growth with another record traffic month in July with more than 61 million unique users on mobile and Web, and we added a record number of Premier Agent subscribers during the quarter. Also, our emerging marketplaces are taking flight as Mortgages Revenue more than doubled in the quarter compared to last year…

Revenue is up 69% for the first half of the year; and at only $85 million in sales, and in the early stages of an economic and housing recovery, management is making a smart call to spend heavily on growth now.

Chairman Elon Musk has described SolarCity Corp (NASDAQ:SCTY) as a “massive, decentralized utility.” Fool analyst Jim Mueller recently bought shares of Solar City for his “Messed up Expectations” portfolio, and his analysis shows how large the opportunity is for the company. A couple of key points:

1). Cost of solar power production has decreased significantly over the past decade
2). Energy use is increasing
3). Energy company cost increases will help solar reach parity within the next decade

As Jim mentions in the article linked above, solar only accounts for about 0.5% of the total power generated in the U.S. right now, and SolarCity Corp (NASDAQ:SCTY) only accounted for about 4% of the solar generation added to the grid last year. And as the first company of its type with a nationwide footprint, its scale gives Solar City a massive advantage with government agencies like the DoD and large corporations like Wal-Mart, as compared to its competitors. Its ability to offer reduced electricity costs for such large organizations could lead to incredible returns over the next decade, especially as solar power becomes even more affordable in more areas.