While the market driven by short-term sentiment influenced by uncertainty regarding the future of the interest rate environment in the US, declining oil prices and the trade war with China, many smart money investors are keeping their optimism regarding the current bull run, while still hedging many of their long positions. However, as we know, big investors usually buy stocks with strong fundamentals, which is why we believe we can profit from imitating them. In this article, we are going to take a look at the smart money sentiment surrounding Zai Lab Limited (NASDAQ:ZLAB).

Zai Lab Limited (NASDAQ:ZLAB) was in 20 hedge funds’ portfolios at the end of September. ZLAB has seen an increase in support from the world’s most elite money managers of late. There were 12 hedge funds in our database with ZLAB positions at the end of the previous quarter. Our calculations also showed that ZLAB isn’t among the 30 most popular stocks among hedge funds. 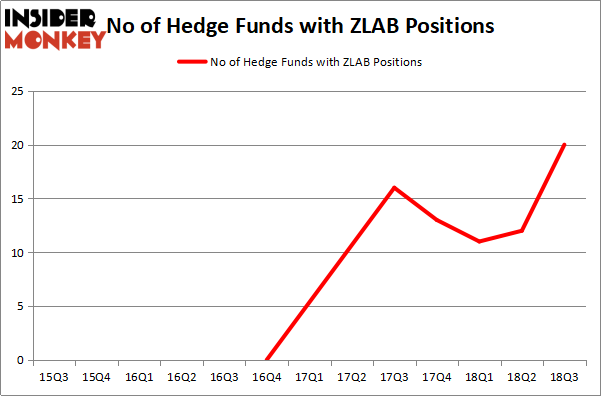 The largest stake in Zai Lab Limited (NASDAQ:ZLAB) was held by Segantii Capital, which reported holding $46.7 million worth of stock at the end of September. It was followed by OrbiMed Advisors with a $34.2 million position. Other investors bullish on the company included Cormorant Asset Management, Rock Springs Capital Management, and EcoR1 Capital.

Consequently, key hedge funds have been driving this bullishness. EcoR1 Capital, managed by Oleg Nodelman, established the most outsized position in Zai Lab Limited (NASDAQ:ZLAB). EcoR1 Capital had $6.8 million invested in the company at the end of the quarter. Paul Marshall and Ian Wace’s Marshall Wace LLP also made a $5.3 million investment in the stock during the quarter. The other funds with brand new ZLAB positions are Steve Cohen’s Point72 Asset Management, D. E. Shaw’s D E Shaw, and Noam Gottesman’s GLG Partners.

As you can see these stocks had an average of 17.25 hedge funds with bullish positions and the average amount invested in these stocks was $98 million. That figure was $135 million in ZLAB’s case. Enova International Inc (NYSE:ENVA) is the most popular stock in this table. On the other hand IRSA Inversiones y Representaciones Sociedad Anónima (NYSE:IRS) is the least popular one with only 10 bullish hedge fund positions. Zai Lab Limited (NASDAQ:ZLAB) is not the most popular stock in this group but hedge fund interest is still above average. This is a slightly positive signal but we’d rather spend our time researching stocks that hedge funds are piling on. In this regard ENVA might be a better candidate to consider a long position.

Is Columbus McKinnon Corporation (CMCO) A Good Stock To Buy?
Monthly Newsletter Strategy
Download a free copy of our newsletter and see the details inside!
Hedge Fund Resource Center
Related News
11 Countries With The Worst Modern Music In The World The Top 5 Robo Advisor Apps of 2018 Five Reasons You Need a Day-Trading Mentor
Billionaire Hedge Funds