It’s time to loosen your belts, restaurant investors! The battle for your fast food budget is starting to get interesting. On Tuesday, McDonald’s Corporation (NYSE:MCD) stock rose around 1% during intra-day trading after the fast-food giant reported August same-store sales growth of 1.9%.

Curiously enough, however, the chain achieved the better-than-expected overall result despite the fact that comparable sales fell 0.5% in its Asia/Pacific, Middle East, and Africa operations, and rose just 0.2% from the year-ago period in its massive U.S. division.

This also comes on the heels of Yum! Brands, Inc. (NYSE:YUM)’s recent SEC filing that showed that, while its own China Division same-store sales declined around 10% year over year, the company is readying itself for a rebound in the Middle Kingdom by the end of the fourth quarter.

To be sure, while weak sales in China have largely held shares of Yum! Brands, Inc. (NYSE:YUM) back so far in 2013, McDonald’s Corporation (NYSE:MCD)’s domestic weakness has remained one of its most significant limiting factors this year, as well. So far, shares of both companies have lagged the broader market by more than 7% and 10% year to date, respectively.

That said, shares of The Wendy’s Co (NASDAQ:WEN) have enjoyed a resurgence this year, skyrocketing more than 77% so far in 2013, thanks largely to its compelling higher-end menu items like the Pretzel Bacon Cheeseburger, and Image Activation reimaging program, which aims to modernize the look and feel of its existing locations: 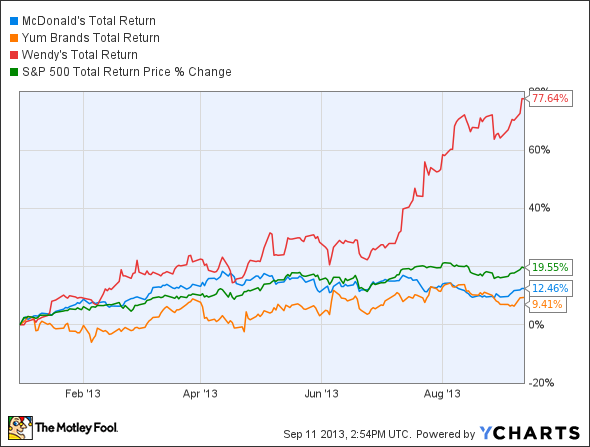 Don’t get me wrong… I’ve already written that I think Yum!’s weakness is a good thing, remembering it should benefit from improving Chinese sales while, at the same time, implementing its perfectly achievable plans to more than double U.S. Taco Bell revenue over the next eight years.

But McDonald’s Corporation (NYSE:MCD), for its part, certainly isn’t sitting on its hands while Yum! Brands, Inc. (NYSE:YUM) and The Wendy’s Co (NASDAQ:WEN)’s attempt to grab market share. In a press release yesterday, for example, McDonald’s Corporation (NYSE:MCD) notes that Europe comparable-store sales benefited from the recent introduction of blended-ice beverages in the U.K., “strong premium food evens in the U.K. and Russia,” and the company’s emphasis on its core products in France.