Investors love stocks that consistently beat the Street without getting ahead of their fundamentals and risking a meltdown. The best stocks offer sustainable market-beating gains, with robust and improving financial metrics that support strong price growth. Does Chipotle Mexican Grill, Inc. (NYSE:CMG) fit the bill? Let’s take a look at what its recent results tell us about its potential for future gains.

The graphs you’re about to see tell Chipotle Mexican Grill, Inc. (NYSE:CMG)’s story, and we’ll be grading the quality of that story in several ways: 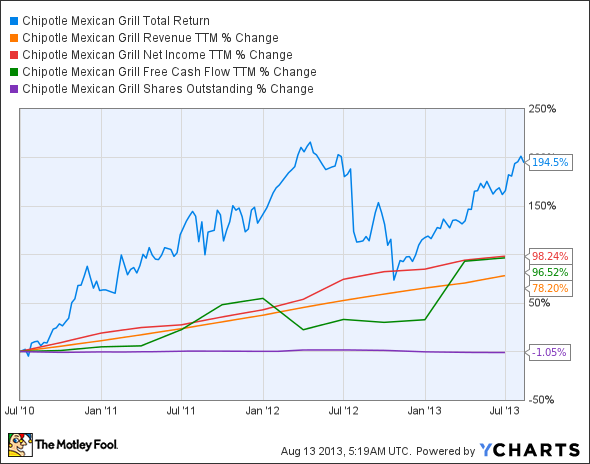 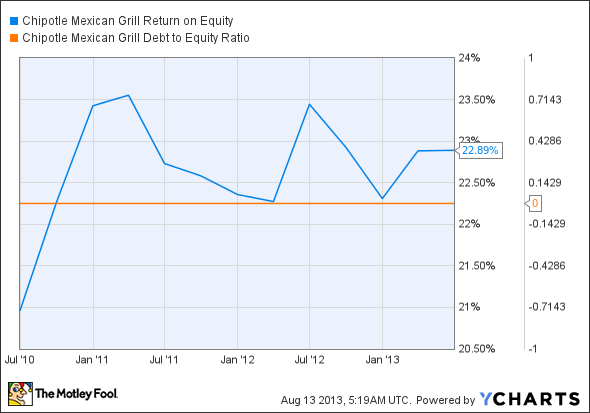 Chipotle Mexican Grill, Inc. (NYSE:CMG) comes through with flying colors, as it earned five out of seven passing grades. One of those failing grades only happened due to the narrowest underperformance — free cash flow has grown right in with net income, and could easily surpass it by the time we look at Chipotle again. This is a strong performance, but can Chipotle keep up its progress without allowing its share price to run away from its fundamentals?? Let’s dig a little deeper to find out.

Chipotle Mexican Grill, Inc. (NYSE:CMG) recently beat Wall Street’s expectations on both top and bottom lines, which isn’t surprising for those who’ve followed the stock for some time. Foolish intern JP Bennett points out CEO Steve Ellis’ long-standing and very ambitious goal of changing people’s perception about fast-food restaurants. Ellis has focused on creating high-quality fast-food outlets along with fostering a robust work culture. That’s worked so well to date that other chains have begun to emulate the strategy.

According to the Pew Research Center, there are some 160,000 fast food restaurants across the U.S., serving about 50 million people, every day. My fellow Fool Sean Williams notes that people have been turning away from fast food due to increasing public awareness of their generally poor nutrition, which is pushed to the fore by healthy lifestyle campaigns (often funded by governments). Despite these underlying concerns, the American fast-food market has grown substantially, from $151 billion in 2003, to $200 billion in 2013. Since Chipotle rarely suffers the same negative health perceptions as its peers, the burrito maker could see outsized gains from the combination of these two trends.

Chipotle’s immediate rivals Yum! Brands, Inc. (NYSE:YUM) and (to a lesser degree) Noodles & Co (NASDAQ:NDLS) are also expanding their product offerings and national footprints. Colorado-based Noodles & Co (NASDAQ:NDLS) has been growing at 16% per year, and it has a lofty plan to launch another 2,500 restaurants within the next two decades. On the other hand, Yum! Brands, Inc. (NYSE:YUM) appears to be moving into Chipotle’s turf with a new concept called “KFC eleven,” which bears certain stylistic and operational similarities to Chipotle. The new concept’s Chipotle-like assembly line might pose a threat to other fast-food companies in the market, according to longtime Fool Rick Munarriz.