Change is uncomfortable. America is entering into a new stage. It is not the supreme world power that it was in the 1990s. Relative to the world economy, America’s economy is getting smaller. Even with these changes, it is important to remember that many American companies are huge multinationals that benefit from growth inside and outside the United States. 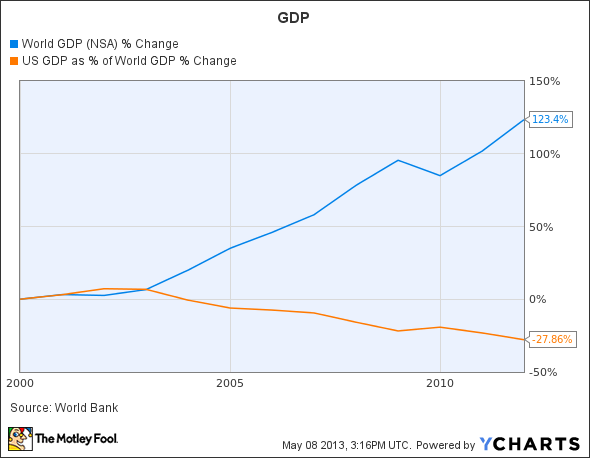 Just because the world economy is growing more quickly than the U.S. economy, it does not mean that the U.S. is not growing. America’s unemployment rate is falling, it is importing less crude and its housing market is starting to come back.

The U.S. is not asleep at the wheel. To ensure peace and a secure trading environment in Asia, Japan and the U.S. are increasing their military ties. The U.S. continues to grow its missile defense capabilities. In many investing circles strategic military planning isn’t discussed as frequently as GDP growth rates, but America’s proactive strategic planning supports GDP growth. 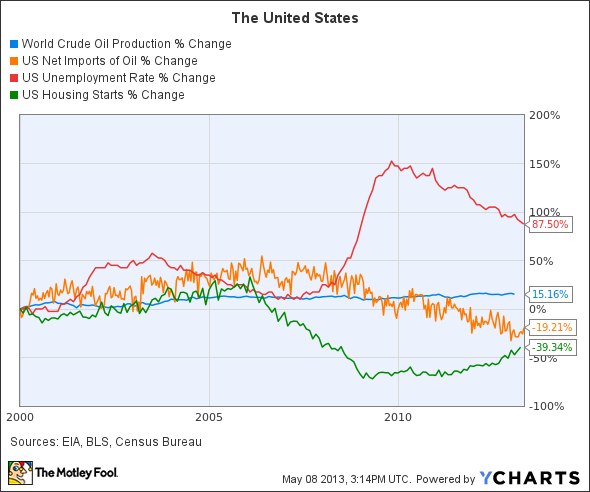 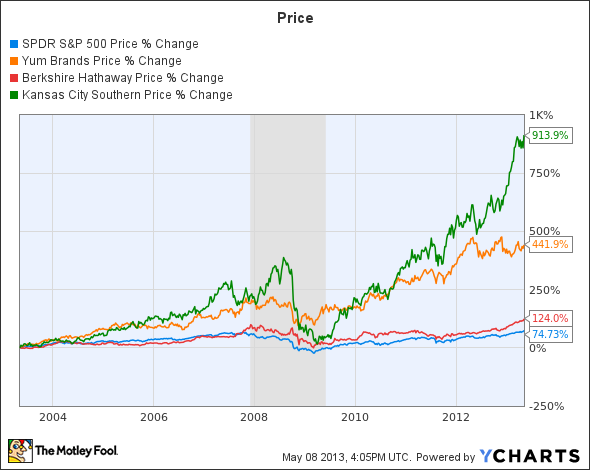 Yum! Brands, Inc. (NYSE:YUM) is a great example of a company that has successfully taken America overseas. The company owns a number of popular and well-known brands like KFC, Pizza Hut and Taco Bell. Yum! Brands has hundreds of stores in India and thousands of stores in China.

This American growth story boasts a return on investment (ROI) of 37.3% and a healthy profit margin of 14.5%. The company has had some temporary setbacks in China due to elevated levels of antibiotics in its chicken. Regardless, over the long term Yum! Brands, Inc. (NYSE:YUM) will continue to grow as Chinese workers enjoy more disposable income.

Kansas City Southern (NYSE:KSU) is an American company with significant interests in Mexico. High oil prices are encouraging many firms to bring production back to North America. Kansas City Southern is a great way to play this trend, because its Mexican assets help to transport goods from Mexican factories to the United States. Also, trains are far more efficient than trucks.

With a total debt to equity ratio of 0.50, Kansas City Southern (NYSE:KSU) has a healthy balance sheet. Its ROI of 10.5% and profit margin of 21.5% let the company plow profits back into operations. Railroads are not very flashy, but they are a steady way to profit from America’s world class economy.

Berkshire Hathaway Inc. (NYSE:BRK.A) is a huge holding company with a market cap over $100 billion. The firm has interests in finance, industrials, transportation and many other sectors. Warren Buffett is Berkshire Hathaway’s famous leader. He looks for companies with strong moats that ensure stable earnings. Buffett himself has said that he expects the growth in the intrinsic value of Berkshire Hathaway to surpass the broad market by only a small percentage in the coming decades. Berkshire Hathaway is so large that it would be very difficult to continue beating the S&P 500 by a large margin for an extended period of time.

The company has little debt with a total debt to equity ratio of 0.32. Its ROI of 7.8% and profit margin of 12.1% are healthy for such a large firm. Berkshire Hathaway isn’t a get-rich-quick scheme, but it is a gateway to steady returns.

S&P 500 Depository Receipts is a simple way to invest in America. The company invests in the S&P 500 index. These companies come from all parts of the economy and operate throughout all corners of the world. The top five holdings of Apple Inc. (NASDAQ:AAPL), Exxon Mobil Corporation (NYSE:XOM), Microsoft Corporation (NASDAQ:MSFT), Chevron Corporation (NYSE:CVX) and Johnson & Johnson (NYSE:JNJ) give investors access to the technology, energy and consumer staples that power the modern world.