The StressTest column appears every Thursday on Fool.com. Check back weekly and follow @TMFStressTest.

Say that you want to invest like Warren Buffett and naysayers will line up to tell you that you can’t. To a large extent, they’re right.

Buffett’s folksy easy-as-pie investing image doesn’t quite jibe with the usurious deals he’s wrung from the likes of General Electric Company (NYSE:GE), Goldman Sachs Group, Inc. (NYSE:GS). Any average Joe investor can buy stock in GE or Goldman, but only Buffett, with his worth-its-weight-in-gold reputation and the massive Berkshire Hathaway Inc. (NYSE: BRK.A) balance sheet can deal for a double-digit preferred dividend from a financial firm known for ripping its clients’ faces off (so to say, of course).

The recent “partner” deal to buy H.J. Heinz Company (NYSE: HNZ) is no different. While 3G Capital is ponying up $4 billion for common equity in the deal, Buffett and his investors at Berkshire are getting a 9% yield on the $8 billion in preferred that he negotiated.

Try as you might, you can’t invest like that. The best you can do to get those kinds of deals is just invest with Buffett by owning Berkshire.

But while those deals are hardly chump change, they’re still dwarfed by the massive, long-term positions that Buffett maintains in his favorite common stocks. Berkshire has a near-$16 billion position in Wells Fargo & Co (NYSE:WFC) . Another $30 billion is split roughly evenly between The Coca-Cola Company (NYSE:KO) and International Business Machines Corp. (NYSE: IBM). And there’s a further $10 billion in American Express Company (NYSE:AXP).

While these investments may not get the same media shake as the preferred deals or the up-and-coming positions from the two Buffett proteges, it’s these holdings that best highlight how retail investors can, in fact, still invest like Buffett.

Be warned, though: This works, but it isn’t particularly exciting.

Invest long term
The Coca-Cola Company (NYSE:KO) first showed up in Buffett’s annual shareholder letter in 1988. At the time, he wrote:

We expect to hold these securities for a long time. In fact, when we own portions of outstanding businesses with outstanding managements, our favorite holding period is forever.

And hold he has. The holding period for The Coca-Cola Company (NYSE:KO) is now closing in on three decades. And those three decades have treated Berkshire well. 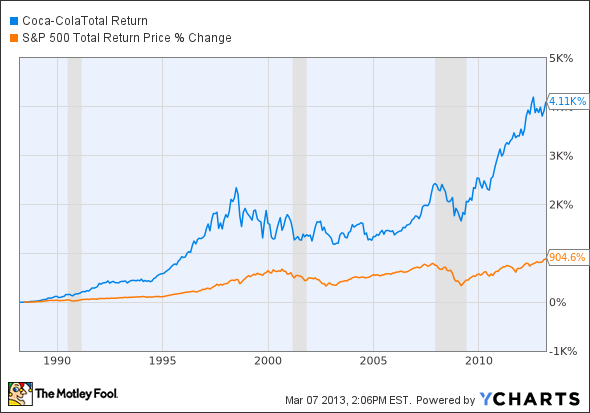 Can you still invest like Buffett? Sure, find great companies, buy them, and hold on for a long, long time.

Quality and well-managed trumps cheap
Buffett is widely known as a “value” investor. To many, this is interpreted as buying the cheapest stocks possible. Buffett is explicitly against that notion.

When Wells Fargo popped up in Berkshire’s 1990 shareholder letter, Buffett had this to say:

…we have no interest in purchasing shares of a poorly managed bank at a “cheap” price. Instead, our only interest is in buying into well-managed banks at fair prices.

With the banking sector melting down in 1990, there were plenty of cheap banks. But Wells Fargo was well run and had a conservative culture. Both endured and led to the giant bank skating through the more recent financial crisis while others… well, didn’t.