Yelp Inc (YELP), Facebook Inc (FB), Google Inc (GOOG): Is This Unprofitable IT Stock a Disaster in the Making?

Memorize this name: Yelp Inc (NYSE:YELP). As you can easily realize after checking the one month stock performance of Yelp Inc (NYSE:YELP), there’s absolutely nothing normal about this stock: a 65.52% increase in 30 trading days took Yelp’s market cap to $3.35 billion, way above Zynga ($2.34 billion) and close to once glorious BlackBerry ($5.02 billion). 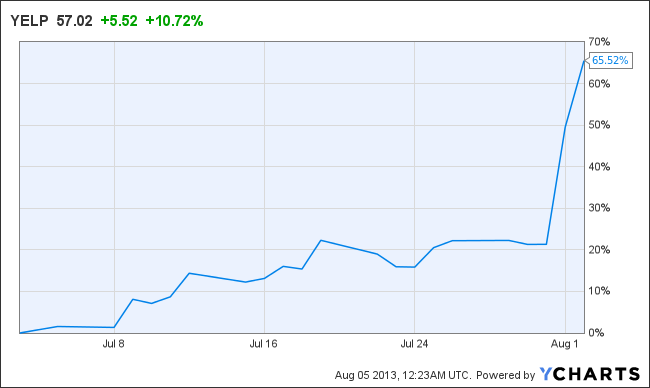 Yelp Inc (NYSE:YELP) does not manufacture cellphones or games. Yelp is a website that connects people to local businesses. It’s mainly user-generated content. About 42 million reviews of every type of local business, from restaurants to plumbers. According to the official slides, the website gets about 108 million unique visitors and the mobile application has been used on approximately 10.4 million unique devices on a monthly average basis. That’s all there is. Now, if there’s something that investors have learned after the 2000 dotcom crash it is that no matter how attractive the monthly average user metric or the app looks like, fundamentals do matter, regardless of the business. So, what do the fundamentals of Yelp look like?

First, I suspect revenue is highly cyclical, evidencing the fact that Yelp is an advertising company, in the sense that most of its revenue comes from ads. We can’t deny the fact that growth is happening. But is the growth rate enough to justify today’s valuation? To answer this question we need to estimate the time when Yelp Inc (NYSE:YELP) will enter profit zone. Unfortunately, every time that Yelp grows its revenue base, its operating expenses grow as well. For this reason the company has never been profitable. Just take a look at 2011: revenues grew to $83 million, but operating expenses grew even faster, reaching $99 million. And a one cent per share loss announced on the latest earnings call, which beat the street consensus, confirms that Yelp still has the same issue. Cost and revenue growth at the same time. According to Morningstar, the average price-to-earnings ratio for this industry is 31. That’s quite high but let’s be optimistic and assume that in the long run, Yelp’s P/E will converge to this value. If that is so, to justify the current $3.36 billion market cap, Yelp would need to generate approximately $108 million in earnings per year. Now, the whole revenue for last year was $137.6 million itself. This implies that unless Yelp experiences massive revenue growth (the kind of growth it hasn’t experienced before) for the next year, it won’t be able to justify its high valuation any time soon.

Notice that the sell-side expects Yelp Inc (NYSE:YELP) to report a loss also this year, followed by earnings per share of  $0.18 in 2014 and $0.54 in 2015. From this perspective, the company is quite far away from consistently high margins.

Too many acquisitions way too early

Although Yelp is not profitable at the moment, it is quite active in acquisitions.It acquired Qype, a social networking & local reviews site with strong presence in Europe for $47.6 million. The company was generating revenues of only $8 million per year, with a net loss of $4 million. Even if revenue grows 20% every year, it will take more than 10 years for Yelp to recover its premium. More recently Yelp acquired online reservation software SeatMe for about $12.7 million. While some of these acquisitions may be successful in the long run, I think the time for Yelp to acquire startups is a bit too early, considering that there are enough risks to deal with coming from the core business, which isn’t profitable yet.