Today, many growing businesses in emerging markets claim to be the “next Amazon.com, Inc. (NASDAQ:AMZN), Google Inc (NASDAQ:GOOG) or eBay Inc (NASDAQ:EBAY).” The prospect that a relatively small company can ride a macro growth trend in a rapidly growing economy is undeniably appealing, and Russia’s search engine Yandex NV (NASDAQ:YNDX) is no exception. Often called the “Google of Russia,” Yandex was once a core holding for many emerging markets investors. But since its public debut in 2011, the stock has lost nearly 30% of its value.

Despite its lackluster stock performance, Yandex still controls 60% of the search market in Russia, one of the world’s key emerging markets. If so, what’s weighing this stock down? Let’s examine some key factors.

To get a better perspective of how Yandex measures up to its competitors, we should compare its financial health to its market peers in the United States and China – Google and Baidu.com, Inc. (ADR) (NASDAQ:BIDU).

Yandex is a very fundamentally appealing stock, with strong growth ratios and no debt. However, that’s only half the story. We should also chart its earnings and revenue growth over the past year. 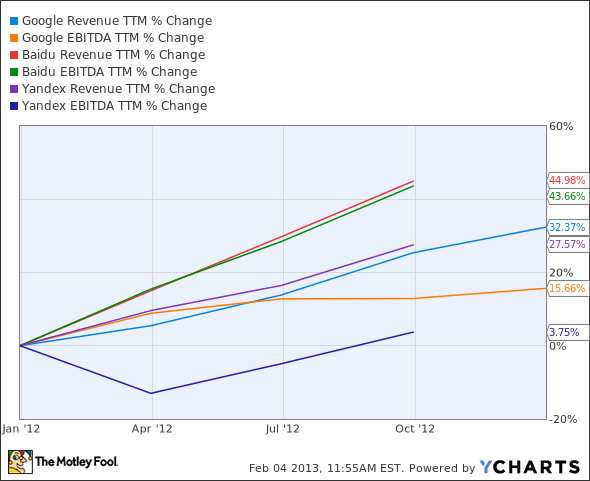 From this chart, we see that even though Yandex’s revenue rose 27.57% in the past two years, its EBITDA only grew by 3.75% after posting negative growth throughout most of 2012. Notice that Baidu has done the best job of keeping revenue and earnings growth synchronized, while Google’s earnings growth has slowed considerably due to its costly acquisition of Motorola. This split between revenue and EBITDA growth tells us that Yandex’s margins are getting squeezed. The next chart confirms that. 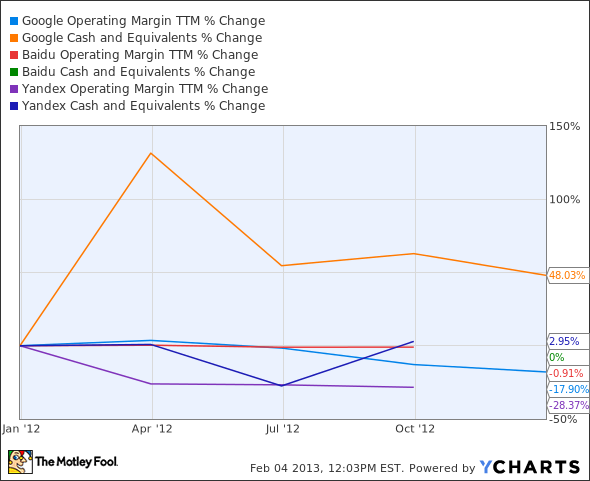 Over the past year, Yandex’s operating margin has dropped 28.37%, while cash is barely growing at all. That means Yandex is facing the classic Internet growth problem – high revenue growth weighed down by oversized marketing and expansion costs, which cut deep into margins and profit.
Yandex faces no real domestic competition in Russia, but Google and Facebook Inc (NASDAQ:FB),which can be freely accessed in Russia, are two looming threats. The fact that Google and Facebook are both banned in China has been a huge boon to Baidu and social network Renren Inc (NYSE:RENN).

Take a look at Google’s market share performance in Russia over the past three years to see why Yandex investors are worried.

Despite a minor recovery over the past year, it’s clear that Yandex, which only has $384.4 million in cash, is being dominated by Google, which can wage an endless war with its $48 billion cash hoard. Factor in Android and the growing mobile market in Russia, and Yandex has a serious problem to contend with.
Facebook, which has 7.6 million users in Russia, has also made it clear that Yandex is not welcome to search its social networks. Yandex recently launched a beta version of the Wonder mobile app, which allows voice searches of social network activities across Facebook and Twitter accounts. Yandex maintained that Wonder wasn’t a “search engine” but rather a “searchable index,” but Facebook immediately took notice.