Rumors are swirling about Yahoo! Inc. (NASDAQ:YHOO) possibly acquiring Tumblr — a company that fuses blogging with social networking — for $1 billion. As Yahoo continues to mount a stock price comeback, a potential Tumblr acquisition has investors dreaming of how high this will send shares flying. To which I say: Forget about Tumblr. Yahoo! Inc. (NASDAQ:YHOO) can give us something infinitely more valuable.

Here are the largest acquisitions from several technology players.

Yahoo acquired Broadcast — an internet radio company — in April 1999. The service has since been discontinued, having failed to provide Yahoo! Inc. (NASDAQ:YHOO) with any tangible benefit. Worse yet, the deal carried an enormous price tag, at more than $10,000 per Broadcast user.

In contrast, Microsoft Corporation (NASDAQ:MSFT)‘s acquisition of Skype has been one of the industry’s more successful purchases. At the time of the acquisition, Skype was bringing in over $800 million in annual revenue from 170 million users. Microsoft doesn’t disclose Skype’s exact financial figures, but Skype does have more than 250 million users today. If the revenue-to-user ratio has stayed the same, then Skype now brings in over $1.2 billion.

Many analysts believe that Microsoft succeeded with this acquisition because it kept Skype autonomous. This is very different from Microsoft’s failed aQuantive acquisition. Six years after spending $6.3 billion for the company, Microsoft recently sold the last piece — Atlas — to Facebook, likely for less than $100 million. The rest of aQunative has been written off as a loss. A major problem was Microsoft’s desire to integrate and change aQuantive’s mission from display ads to search ads, despite aQuantive’s previous success with the former category of ads.

Having seemingly learned its lesson, Microsoft has allowed Skype to continue to grow and develop on its own, with Microsoft’s backing.

Both acquisitions are relatively recent, and their benefit has yet to be seen. But right now, Motorola has failed to deliver an iPhone killer as hoped, and Instagram has yet to make a dime. Neither acquisition seems worthy of its respective price tag.

Yahoo! Inc. (NASDAQ:YHOO)’s potential Tumblr acquisition could be the best billion it ever spent, or a complete waste. Major acquisitions frequently fail to live up to their hype. As of this moment, a successful Tumblr acquisition is far from a sure thing. I would suggest that Yahoo! shareholders hope for something much more important.

Marissa Mayer was made CEO of Yahoo in July of 2012. So far, she may be the best acquisition the company ever made. 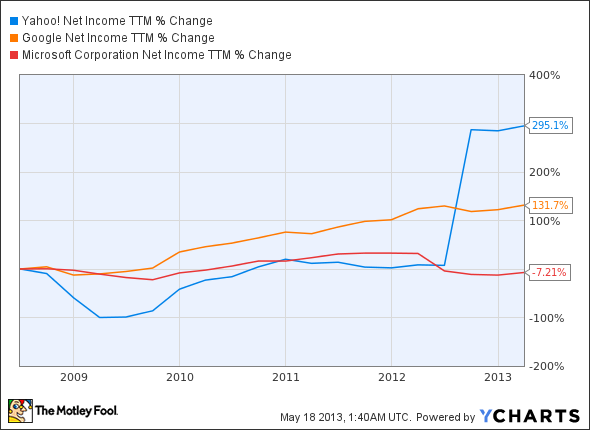 There has been an enormous profit upswing at Yahoo since Mayer took the wheel. In the most recent quarter, although revenue decreased, the company’s profit was up 36%. But upon further digging, it was revealed that 56% of Yahoo’s profit came from Alibaba and Yahoo! Japan – not from Yahoo! Inc. (NASDAQ:YHOO) itself. To have true profit growth, Yahoo! needs a plan.