With the average daily rate of hotel rooms increasing by about 5% so far this year, hoteliers are gearing up for profit surges. I expect that to last for at least the next several years as international travel ramps up.

Wyndham Worldwide Corporation (NYSE:WYN) is looking to expand in the developing world, and that is a strategy many of the top companies are taking. The opening of a Peruvian addition to the 7,410 hotel fleet offered by the company is the latest addition. Investing in Wyndham Worldwide Corporation (NYSE:WYN) will allow you to catch the wave of developing world progress, and that economy will surge in the next several years, so get in now.

With the company planning to introduce properties in Nicaragua and Columbia in 2014, now could be your chance to purchase this stock before profits really start to come in and investors catch on to this growth. Expect analyst EPS estimates to increase as the firm solidifies expansion plans.

Currently, analysts expect EPS to rise this year by 14.5% and another 12% next year. Revenue looks set to increase by 9.7% this year and 5.9% next year. I expect revenue gains to be more substantial next year, due to Latin American expansion, but profits will be temporarily offset by startup costs.

Marriott International Inc (NYSE:MAR) won’t likely be able to continue its high growth rate, which has been in the double digits for the last three quarters. Instead, the company will likely suffer from the continued weak European economy. With so few jobs in Europe (see chart below), there won’t be many travelers within the continent. 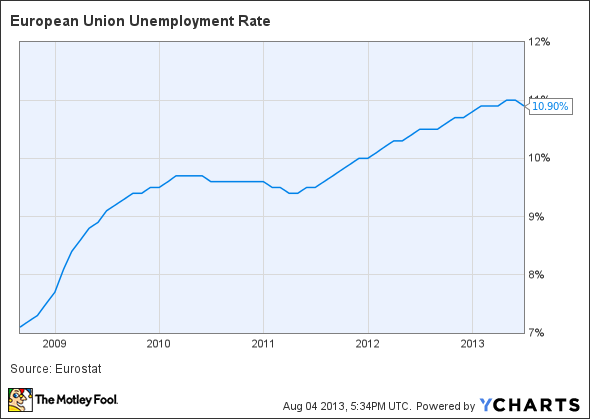 However, the suffering European economy won’t last forever, and Marriott International Inc (NYSE:MAR) is taking this opportunity of low property prices to expand there. In Paris alone, the firm now has 12 properties. This expansion is sure to pay off once the European economy turns around.

For now, the firm is taking advantage of increased travel throughout the world by offering customers airline miles or hotel points on each dollar spent with the company. Facilitating the ease of travel in a society increasingly taking to the skies will set the company up for profits long into the future. And as the global economy continues to be a priority for firms, expect increasing business trips.