WillScot Corporation (WSC): Are Hedge Funds Right About This Stock?

WillScot Corporation (NASDAQ:WSC) shareholders have witnessed a decrease in hedge fund sentiment in recent months. Our calculations also showed that wsc isn’t among the 30 most popular stocks among hedge funds. 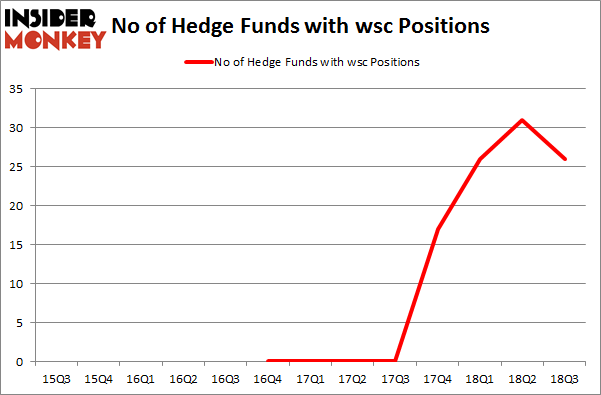 Since WillScot Corporation (NASDAQ:WSC) has faced declining sentiment from the entirety of the hedge funds we track, logic holds that there were a few money managers who were dropping their entire stakes by the end of the third quarter. Interestingly, Isaac Corre’s Governors Lane dumped the largest investment of the 700 funds tracked by Insider Monkey, totaling close to $25.2 million in stock, and Steve Pigott’s Fort Baker Capital Management was right behind this move, as the fund cut about $14.8 million worth. These bearish behaviors are important to note, as total hedge fund interest was cut by 5 funds by the end of the third quarter.

As you can see these stocks had an average of 13.75 hedge funds with bullish positions and the average amount invested in these stocks was $141 million. That figure was $262 million in WSC’s case. Mueller Water Products, Inc. (NYSE:MWA) is the most popular stock in this table. On the other hand NOW Inc (NYSE:DNOW) is the least popular one with only 11 bullish hedge fund positions. Compared to these stocks WillScot Corporation (NASDAQ:WSC) is more popular among hedge funds. Considering that hedge funds are fond of this stock in relation to its market cap peers, it may be a good idea to analyze it in detail and potentially include it in your portfolio.