Pfizer Inc. (NYSE:PFE) stock is off to a fine start in 2013. It might have gotten a bit ahead of itself earlier this year, but Pfizer stock has matched the S&P 500 for the year. For a large pharmaceutical company, you can’t ask for too much more. 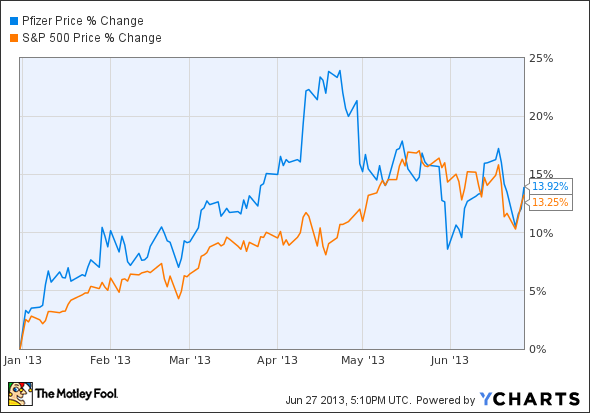 Of course, past performance is rather meaningless as an investment thesis. The more important question is whether Pfizer Inc. (NYSE:PFE) stock will do well in the second half of the year.

I like the slimmed-down version of Pfizer Inc. (NYSE:PFE) after it sold its nutrition business, and spun out its animal health business into Zoetis Inc (NYSE:ZTS).

The company allowed shareholders to trade in Pfizer stock for shares in Zoetis. More shareholders took Pfizer Inc. (NYSE:PFE) up on the deal than the company had shares of Zoetis Inc (NYSE:ZTS), resulting in a pro-rata exchange based on the number of shares investors were interested in exchanging.

After the exchange is complete, Pfizer Inc. (NYSE:PFE) won’t be able to include its portion of Zoetis’ earnings on its profit statement, but it’ll have a lower share count, which will more than make up for the lower earnings, resulting in higher earnings per share starting next year.

With Pfizer shrunk down, the development of its pipeline becomes more important for the growth of Pfizer stock.

Of the recent drugs launched, Pfizer’s oral rheumatoid arthritis drug Xeljanz is probably the most important, given its blockbuster potential. In the first full quarter on the market, sales of Xeljanz were $11 million. Not a bad start, but a far cry from AbbVie Inc (NYSE:ABBV)‘s Humira, which had $4.3 billion in sales in the first quarter!

To reach that kind of sales number, Pfizer needs to expand Xeljanz into additional indications; Humira is approved for seven different autoimmune diseases. Pfizer is pushing Xeljanz in that direction, with phase 3 trials for psoriasis and psoriatic arthritis.

As an oral drug, Xeljanz should be able to trounce Humira and the other two anti-inflammatory mega blockbusters — Johnson & Johnson (NYSE:JNJ)‘s Remicade, and Amgen, Inc. (NASDAQ:AMGN)‘s Enbrel — because they have to be injected or infused. But doctors have a lot of experience with the three drugs, which all work on the same TNF-alpha pathway. It’s going to take time for Pfizer to get doctors comfortable with prescribing Xeljanz, which works through a different pathway called JAK.

Investors will have to wait a month until the July 30 earnings announcement to get a better idea of where Pfizer stock might go in the second half. I think owners of Pfizer stock should be happy if the share price can get through the year matching the S&P500, while working through its post-Lipitor funk, especially since investors get to collect a dividend while they wait for better times.

The article Will Pfizer Stock Soar or Sink for the Rest of 2013? originally appeared on Fool.com and is written by Brian Orelli.