Will Monster Beverage Corp (MNST) Have a Monster Year in 2013?

Shares of Monster Beverage (NASDAQ:MNST) have been all over the map lately. In November, the stock nosedived to $39.99, as a result of regulatory concerns over the company’s namesake energy drink. However, the rejection didn’t last long. By mid-December the stock was back up again, trading above $57 a share. Nevertheless, this volatility continued into the new year, as analysts once again kicked around the possibility of The Coca-Cola Company (NYSE:KO) acquiring the energy drink maker.

Rumor or reality?
The stock market was abuzz last week with takeover talk. But before we get ahead of ourselves, let’s not forget that this wouldn’t be the first time the market wrongly speculated about a Monster Beverage acquisition. Last year, The Wall Street Journal published a story reporting that Coke was in talks to buy the Corona, Calif.-based company — a deal that we now know never proved a reality.

Yet, unlike with last year’s rumor, Coke hasn’t openly denied the reports this time around. For the soda giant, buying Monster Beverage would give it a much-needed boost in the fast-growing energy drink sector. This is especially beneficial because energy drinks in general carry higher margins than carbonated soft drinks. Not to mention, Monster’s operating margin of more than 26% is one of the highest in the industry. 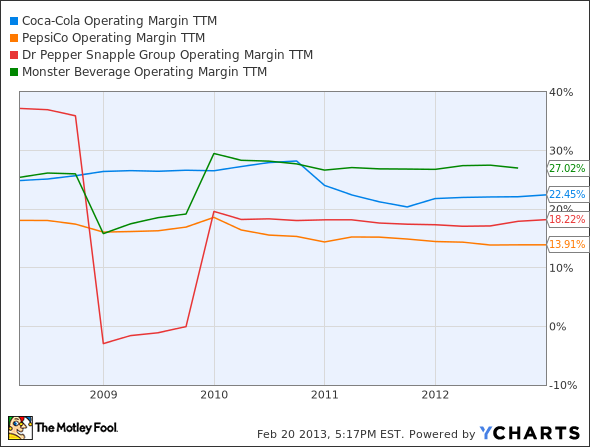 Additionally, a takeover bid would give Coke a leg up over archenemy PepsiCo, Inc. (NYSE:PEP) in the multibillion-dollar energy drink space. In the last few years, both Pepsi and Coke started mixing and selling their own energy concoctions in hopes of offsetting slumping soda sales in the United States.

Pepsi has its AMP pick-me-up, while Coke currently offers a mix of energy libations including Full Throttle, Burn, and Gladiator. Despite the massive marketing budgets these companies have, neither has been able to replicate Monster’s success in the energy beverage category. In fact, both Pepsi’s and Coke’s shares of the energy drink market trail that of Monster Beverage .

Good to the last drop?
According to Bloomberg, “Monster Beverage’s revenue climbed an average of 24% in each of the past five years, compared with average annual sales growth of 15 percent for Coca-Cola and 14 percent for PepsiCo in the same period.” This impressive sales growth offers yet another compelling reason for Coke to gobble up the beverage company.

Of course, that’s not to say a potential takeover would be cheap. Shares of Monster Beverage currently trade at around 21 times next year’s earnings. If the deal were to go through, it would likely be one of the priciest acquisitions in the industry’s history.

My fellow Fool Anders Bylund estimates the value of a possible Monster Beverage takeover to be around $10 billion. Meanwhile, Coke’s biggest brand buyout up to now was the company’s 2007 acquisition of vitaminwater drinks, which was valued at $4.2 billion. Given the high price tag and complicated nature of a Monster-Coke merger, a takeover deal is far from certain at this point.