Shares of software giant Microsoft Corporation (NASDAQ:MSFT) raced as much as 4.7% higher this morning. Microsoft Corporation (NASDAQ:MSFT)’s stock was not only the biggest gainer by far on the Dow Jones Industrial Average (Dow Jones Indices:.DJI), but also the fourth-biggest gainer on the much wider S&P 500 index. That’s an impressive move for an industry titan with a bulky $285 billion market cap to push around, especially on a flat day for the Dow. It takes big news to engineer a jump like this one.

Why is this such a big deal? Well, Microsoft’s management troubles have been widely documented, and a change at the top could spark new life in these listless shares. ValueAct specializes in finding turnaround avenues for failing businesses with healthy fundamentals, and Redmond fits that bill to a “T.”

This could be the first sign of a major shakeup in Redmond — and a much needed one, I might add.

Barlow immediately promised to transform the “iconic” Adobe brand. Adobe Systems Incorporated (NASDAQ:ADBE) shares have crushed the market since ValueAct became involved, and even more so since the standstill agreement was announced in December 2012. 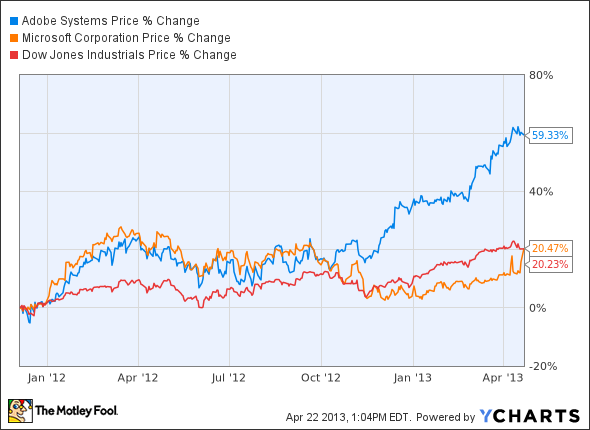 ValueAct would love to do the same for Microsoft Corporation (NASDAQ:MSFT)’s even larger brand, and investors seem to like the idea very much. They’re voting “yea” with their wallets today.

The article Will Microsoft Stock Follow Adobe’s Market-Beating Example? originally appeared on Fool.com and is written by Anders Bylund.

Fool contributor Anders Bylund holds no position in any company mentioned. Check out Anders’ bio and holdings or follow him on Twitter and Google+. Motley Fool newsletter services have recommended buying shares of Adobe Systems.

Bonus Biotech Stock Pick: You can also find a detailed bonus biotech stock pick that we expect to return more than 50% within 12 months.
We may use your email to send marketing emails about our services. Click here to read our privacy policy.
Related Insider Monkey Articles
General Electric Company (GE) Reports..and Stock Sinks