Will Hewlett-Packard Company (HPQ) Provide Guidance Above Expectations Next Week?

Shares of struggling technology giant Hewlett-Packard Company (NYSE:HPQ) have recovered somewhat from their poor 2012 performance in the past three months, but have still lost roughly 40% of their value in the past twelve months. 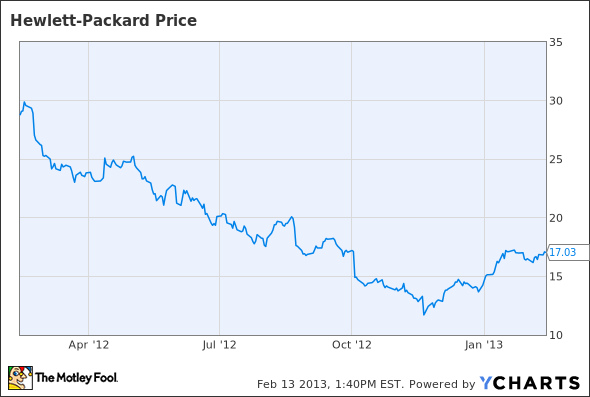 HP has disappointed analysts and investors repeatedly in recent years. The company desperately needs to show the investment community that performance has bottomed out and that HP can soon return to EPS growth (however modest that may be at first). A good first step for HP would be providing guidance above analyst estimates when it reports earnings next week. Fortunately, the recent slide in the yen’s value against the dollar could help HP achieve that goal.

Yen devaluation could provide a boost
The recent governmental change in Japan has led to looser fiscal and monetary policy. As a result, the yen-dollar exchange rate has moved by 20% since the beginning of October, from around 78 yen per dollar to 93 yen per dollar. HP’s printing division (responsible for about 30% of the company’s profit recently) relies heavily on components built in Japan, primarily by Canon Inc. (ADR) (NYSE:CAJ) . At several points in the past two years, HP’s management has blamed the strong yen for declines in HP’s printing segment operating margin. The recent weakening of the yen could increase the printing segment’s operating margin by 300 basis points, based on historical margins.

Ultimately, improvement on that scale could boost HP’s annual profit by $0.30 a share. Theoretically, HP’s recent reorganization and cost-cutting moves could allow even greater margin expansion. Most notably, CEO Meg Whitman decided to combine the PC and printer divisions last year. The reorganization is expected to generate savings through supply chain coordination, along with some headcount reductions. According to Whitman, HP already began to see cost benefits in the quarter that ended last October. These cost reductions should be even more significant in fiscal year 2013.

While the weakened yen is providing HP an unexpected margin benefit, in the near term HP could be hit with offsetting losses from its yen currency hedges. Investors should pay close attention to any information HP provides next week on the scale of cost improvements in the printing business versus offsetting hedging losses.

PC weakness still a headwind
On the other side of the ledger, HP will continue to see headwinds from the weak PC market. Microsoft Corporation (NASDAQ:MSFT)‘s Windows 8 has seen weak demand since its launch in late October. While the new release boosted Windows sales by 24% in Q4, that initial jump was much smaller than the increases seen with previous Windows releases. Many PC makers have been introducing Chromebooks based on Google Inc (NASDAQ:GOOG)‘s free cloud-based Chrome OS to offset weakness in traditional Windows PCs. Hewlett-Packard recently joined this trend, releasing the HP Pavilion Chromebook.