Apple Inc. (NASDAQ:AAPL), famous for its flagship premium products like the iPhone and iPad, has seen a precipitous drop in its share price since last September. Bears argue that Apple Inc. (NASDAQ:AAPL)’s iPhone market share is facing serious threat from Samsung’s Galaxy range of smartphones, and believe that the return of Research In Motion Ltd (NASDAQ:BBRY) could add more fuel to the fire.

In this article, I will focus on Apple’s transition from a consumer electronics business to an internet-based software and media business. I will also make a bullish case for Apple Inc. (NASDAQ:AAPL)’s stock based on this transition and Apple’s relative valuation.

Apple owns and manufactures the luxury brands iPhone and iPad. These two premium products contribute the lion’s share of Apple’s revenue. As a result, investors treat Apple as a consumer electronics business, a sector that historically carries a comparatively low PE multiple because of its limited growth prospects.

Now, with the rise of Samsung’s comparatively cheap mass-mobility products, Apple’s market share is facing a severe jolt. But this was bound to happen. After reaching its saturation point, the market share of any luxury brand can only decrease. This is true for BMW, Cartier, and Apple’s iPhone alike. Investors might become oblivious, to this reality but Apple Inc. (NASDAQ:AAPL) is not. They’re exploring newer avenues to spread their business, which I feel is even more exciting from an investor’s point of view. Consider the following:

Apple’s Streaming Media Business: The rumor that Apple would pursue its own music-streaming service has been buzzing around for a while. Many observers feel that a streaming service would fit naturally alongside iTunes, which currently accounts for about 60% of all digital music sales, and recent developments in the relationship between iTunes and iCloud suggest that there is room in the Apple ecosystem for streaming media.

The latest buzz about an iStreaming service comes from a Reuters report, in which three sources tell the publication that Apple CEO Tim Cook met with Beats Electronics CEO Jimmy Iovine late in February. Observers were quick to conclude that Cook was scoping out the company’s recently-unveiled music-streaming service, called Project Daisy.

Apple sees the popularity of Pandora Media Inc (NYSE:P) and others, and also wants to include iAds in a streaming service to make it ad-supported and boost that aspect of its business. iRadio, as the service is apparently being dubbed, would be a significant help for Apple on mobile devices, as a supplement to, not a replacement for, traditional direct digital media sales.

Apple’s TV Software Business: It’s clear that Apple Inc. (NASDAQ:AAPL) is ready to take its TV dreams to the next level. The only question remains is how. Options include making an HDTV itself, branching out into smart monitors and peripherals, or devising a new STB (set top box) strategy, perhaps partnering up with pay-TV operators to become the middleware for operator-issued STBs. The latter is a rumor the Wall Street Journal explored last year.

“We think there is a huge developer opportunity in the living room, utilizing the existing Apple TV set top box, which may or may not be in advance of an actual television,” according to Jefferies & Co. analyst Peter Misek. “We think developers are clamoring for an opportunity to get access to that.”

Apple Deserves a P/E like Google Inc (NASDAQ:GOOG), if not Amazon.com, Inc. (NASDAQ:AMZN)!

Apple Inc. (NASDAQ:AAPL) has EPS of $44.09, compared to Google‘s  $32.31. On those earnings, Apple is getting a P/E multiple of only 10.06, compared to Google’s 25.20. I think this discrepancy owes to Wall Street’s wrong perception about Apple as a consumer electronics company. But that perception will change going forward.

Once Wall Street is convinced that Apple is not a consumer electronics story any more, investors could see a mammoth rise in its shares. 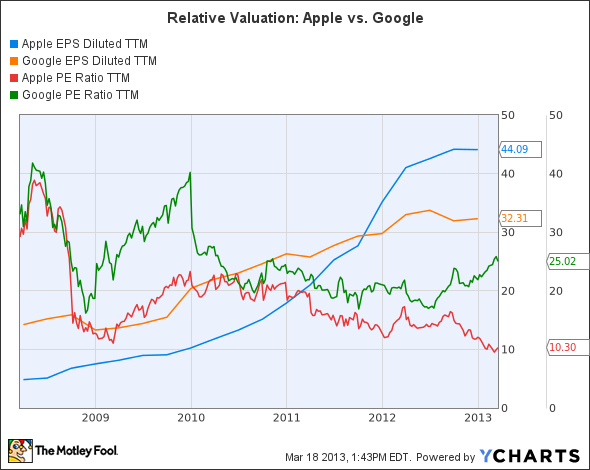