The coveted title of “Largest Company in the World” is up for grabs. Apple Inc. (NASDAQ:AAPL) has lost its temporary place on the market-cap throne, while chief rival Exxon Mobil Corporation (NYSE:XOM) never wavered. Exxon grabbed the top spot briefly at the end of January, but the race has become a day-to-day slugfest, with titles trading hands almost daily. 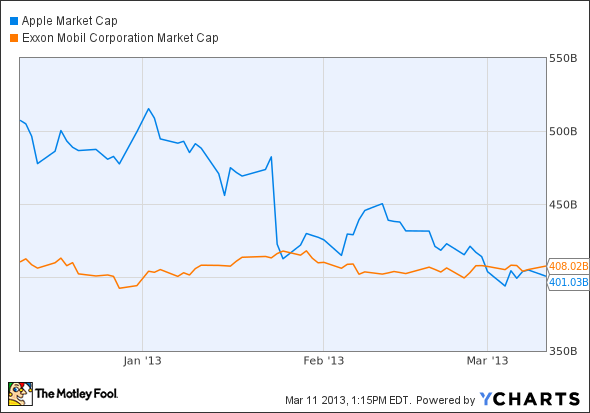 These two megastocks currently outclass every other company on the market by a wide margin. Google Inc (NASDAQ:GOOG) slides in at No. 3. Its $276 billion market cap is about 30% smaller than the reigning champs, but Big G is chasing all-time highs after surging 47% over the last nine months. At the same time, Apple Inc. (NASDAQ:AAPL) plunged 25% and Exxon Mobil Corporation (NYSE:XOM) gained a modest 11%.

That doesn’t mean that Exxon and Apple will hold court forever, nor necessarily that Google will the stock to unseat them. Things can change very fast, even in the upper echelons of the market hierarchy.

The situation was very different just 10 years ago, for example. 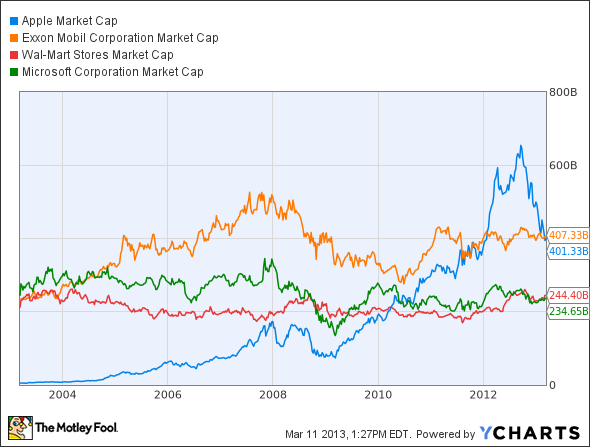 Exxon was fighting Wal-Mart Stores, Inc. (NYSE:WMT) for second place, about $50 billion behind then-leader Microsoft Corporation (NASDAQ:MSFT). But Wal-Mart and Mr. Softy haven’t been close to the top since 2005, and Exxon Mobil Corporation (NYSE:XOM) ruled supreme through most of the last decade. Oil just never goes out of style. And congratulations on your riches if you saw iPod maker Apple Inc. (NASDAQ:AAPL) rising to $600 billion from that ancient vantage point, because most investors were utterly blindsided by that 7,500% move.

Of the three Dow Jones Industrial Average members that fought for the market-cap crown a decade ago, only Exxon remains in the absolute elite. Apple and Google are outsiders, growing large without ever joining the Dow club.

Microsoft has fallen out of grace thanks to repeated management missteps and a failure to lead the mobile revolution. Wal-Mart’s slouch makes less sense, given how price-sensitive consumers become during times of economic crisis, but e-tailers and rival big-box chains have taken bites out of Sam Walton’s retail empire.

Google might be the next company to climb to the top of the heap. Maybe a fallen titan from years past will come roaring back. Or perhaps some little-known small-cap stock is brewing up another fantastic surge in the Apple Inc. (NASDAQ:AAPL) mold, and nobody sees it coming yet.

The one thing you can bet on is this: Today’s giants are never safe from sudden revolutions. Apple Inc. (NASDAQ:AAPL) and Exxon must always sleep with one eye open.

The article Will Apple Claim Exxon’s Market-Cap Crown? originally appeared on Fool.com and is written by Anders Bylund.