Advanced Micro Devices, Inc. (NYSE:AMD) has found a buyer for its campus in Austin, Texas. The final price might not be exactly what the chip designer had in mind, though.

About three months ago, the company announced a plan to sell this property and lease it back from the as-yet unnamed buyer. Advanced Micro Devices, Inc. (NYSE:AMD) was hoping for as much as $200 million of fresh cash in its pockets.

The deal is done. Advanced Micro Devices, Inc. (NYSE:AMD) will sell 58 acres of real estate with enough office space for 1,900 employees, and the net price is $164 million. The company will sign a 12-year lease agreement on closing. The buyer is an affiliate of privately held real investment firm Spear Street Capital, based in San Francisco with operations nationwide.

Advanced Micro Devices, Inc. (NYSE:AMD) is in chronic need of cash infusions like this one. The company has a bad habit of reporting negative cash flows, and it’s gotten worse lately. Operating costs are running amok, even as revenue started drooping in 2012. The result is weak cash flows and often negative earnings. 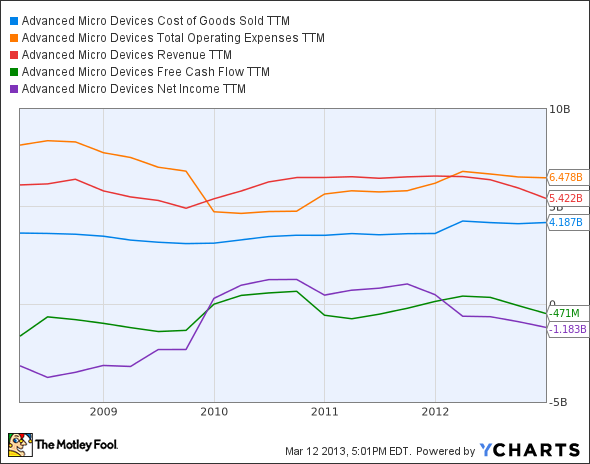 This leaseback deal doesn’t give Advanced Micro Devices, Inc. (NYSE:AMD) a whole lot of financial breathing room when you consider that it burned $471 million of cash last year. But every little bit helps, I suppose.

But I’m afraid that Advanced Micro Devices, Inc. (NYSE:AMD) is arranging the deck chairs on the Andrea Doria. Intel Corporation (NASDAQ:INTC) is crushing AMD in almost every way — resources, product performance, mobile ambitions — but even that mighty chip giant is troubled by the rapid rise of tablets and smartphones. AMD is swimming against two tides, namely massive competition and a shrinking core market.

This real estate move might even be a warning sign, an emblem of AMD’s growing desperation. You know who else is doing big leaseback transaction right now? The HMS Titanic (a much larger disaster and more costly than the Andrea Doria) would be Nokia Corporation (ADR) (NYSE:NOK), which missed the boat on modern smartphones and recently sold its Finnish headquarters for $222 million in a similar deal.

Both Nokia Corporation (ADR) (NYSE:NOK) and AMD are hoping for a miraculous turnaround, if only we give them some time. I’m afraid both gambits will ultimately fail, which is why I have started underperform CAPScalls on both stocks.

The article Will AMD’s Real Estate Assets Save the Sinking Ship? originally appeared on Fool.com.