Wide Moat Stocks- Not As Many As You Think: Dell Inc. (DELL), Hewlett-Packard Company (HPQ)

Dell Inc. (NASDAQ:DELL)’s $24.4 billion dollar LBO puts the final nail in the coffin on one of the great stock stories of all time.  The company would go public in 1988 and could easily be classified as the stock of the decade during the 1990’s.  During that decade, the stock would appreciate at an annual rate of 97%!  However, the next decade would be a completely different story and the final takeout price of $13.65 per share is almost 75% below the all-time high.  Dell isn’t the only company to have this situation unfold, although few have witnessed such extremes during their boom and bust.

Lesson 1: Be Leary of Results Leveraged Mostly to Cost Cuts

Dell’s initial success came via selling directly to consumers and being the low cost supplier by cutting out the retailer’s share.  Being the early adopter was a key to its success, but this concept would eventually be replicated.  Advantage lost.  The company was also great at controlling its supply chain and continually extracting cost savings to fuel operating leverage and robust earnings-per-share growth.  This too has its limits as it becomes harder and harder to wring out inefficiencies.

This situation recently played itself out again with another technology bellwether- Hewlett-Packard Company (NYSE:HPQ).  Following the tech bubble, the company began in earnest to cut costs.  This was taken to another level when Mark Hurd took the reins in 2006.  As can be seen in the chart below, the stock price moved up as the company did an excellent job of raising operating margins via cost cutting.  But notice how quickly the stock price stopped in its tracks when margins ceased expanding. 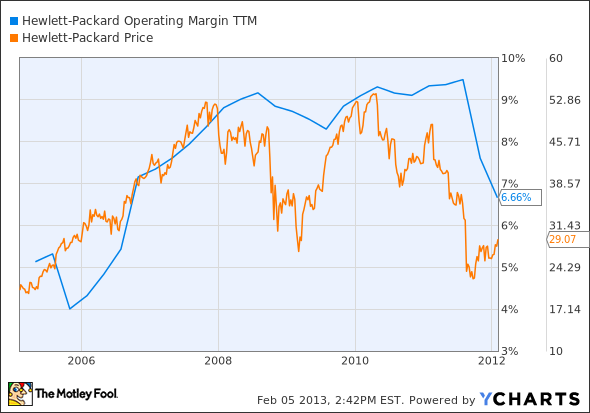 Cost cutting is great and can propel a stock to short-term outperformance, but it is not a long-term competitive advantage.  The competitive nature of business will limit the upside and sustainability of a company’s margins.  Ultimately, Hewlett-Packard was a victim of slowing sales as the industry struggled amid losing market share to portable devices and persistent product deflation.  Hewlett-Packard may offer up some near-term margin improvement or do some corporate actions such as a share buybacks or possibly even splitting up the company, but they are a company with limited competitive advantages.