Why You Should Hold Apple Inc. (AAPL) For Eternity

Apple Inc. (NASDAQ:AAPL) has spent more time in the financial news over the past few years than probably any company on the planet.  And when one considers that it essentially makes and sells only a half-dozen different things, the weekly product-to-article ratio may be the highest in history. And while these articles have run the gamut of subjects, as investors, we have to filter out the “noise,” and focus on the “signal,” to paraphrase Nate Silver.

With that said, I’ve identified the one key reason that Apple Inc. (NASDAQ:AAPL) is a company that any investor could own truly forever, and be rewarded well with that decision.

But this is a Tech company.  Who holds those forever?

Good point, and this is what makes my point even more valid.  The challenge for a technology company is remaining valid.  And as compared to an industrial like General Electric Company (NYSE:GE), or a consumer goods name like The Procter & Gamble Company (NYSE:PG) or The Coca-Cola Company (NYSE:KO).  It’s the modern-day International Business Machines Corp. (NYSE:IBM), though one could make the case that International Business Machines Corp. (NYSE:IBM) is the modern-day IBM: 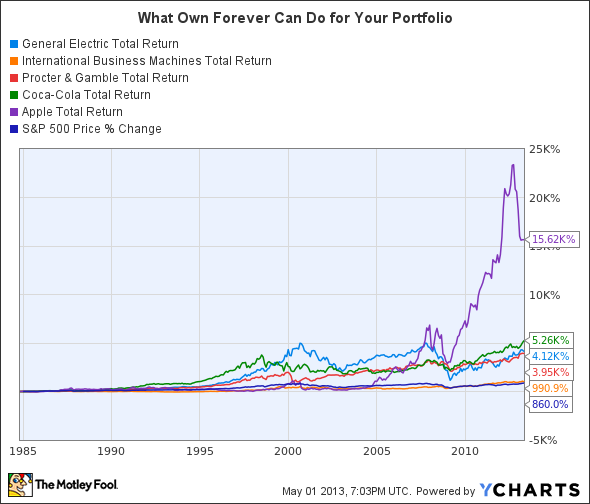 As the chart shows, investing in these stalwarts in 1981, and holding, reinvesting dividends, would have made for a legendary performance for any investor.  And while Apple Inc. (NASDAQ:AAPL) would have been quite speculative back in ’81, the others were well-established companies and brands, and have all significantly outperformed the S&P 500 over the past couple of decades.

International Business Machines Corp. (NYSE:IBM) has demonstrated its willingness repeatedly to reinvent itself- the one thing that has allowed it to thrive as a technology company, while many of its peers have fallen to the wayside over the decades, caught in the trap of defending inferior technology.  Two other traits that IBM shares with Apple Inc. (NASDAQ:AAPL) are its quality management, and managements demonstrated willingness and ability to return cash to shareholders though dividends, and to operate a very well-run share buyback program, which is a rarity in the tech world.

General Electric Company (NYSE:GE) has also shown a willingness, even as the behemoth of diversified Industrials, to reinvent itself while still keeping its core business intact.  And while the financial destruction General Electric Company (NYSE:GE) Capital, the company’s finance arm, left the company severely harmed, management has done an admirable job of moving the company forward more lean and focused on its core and growing business units, shifting massive amounts of focus on the future of energy, in both solar and natural gas.

The Procter & Gamble Company (NYSE:PG), and The Coca-Cola Company (NYSE:KO) have simply maintained powerful stables of strong consumer brands, and aggressively expanded internationally as developing nations increase demand for their products.  But there’s more to the Apple Inc. (NASDAQ:AAPL) story than just brand cache, or a willingness to expand to new growth areas.

ASP and margins are down.  Why would I hold if that’s happening?

Let’s not take those items out of context. Apple has maintained high margins for years: 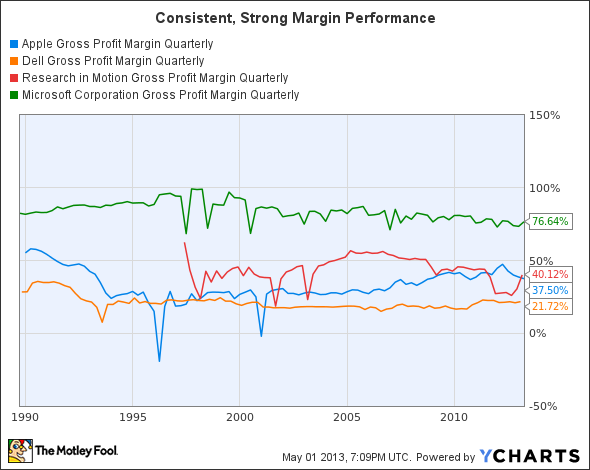 Comparison to the companies above may seem off-base, but it’s really important for context:  Apple does a little bit of all the things that the companies above do, and historically has maintained incredible margins. It’s not just a hardware maker; OSX and IOS are critical to the company’s success; control over the software is what allows the company to make such compelling hardware with fantastic integration with the software, all while maintaining very high margins at compelling retail prices.

About those falling Average Sales Prices(ASP’s): It’s at the heart of the matter

As time has passed, the separation between the iPhone and competing products has narrowed. Samsung Electronics Co., Ltd. (KRX:005930), most notably, has produced compelling products, established brand value, and is probably Apple Inc. (NASDAQ:AAPL)’s biggest competition in the Smartphone market, no matter where you stand in regards to the allegations of patent infringement.