Why You Should Buy Herbalife Ltd. (HLF)

With all the controversy over Herbalife Ltd. (NYSE:HLF), and its multi-level marketing sales structure, this stock is poised to make a significant move up or down within the next twelve months, and I believe the direction it will take is up — with potential gains of 30% – 50% during that time. 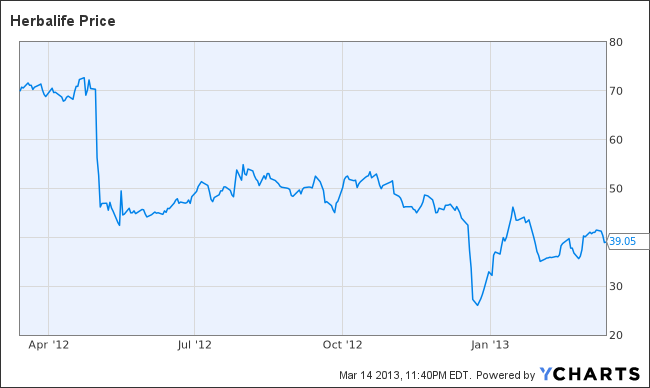 Trading as high as $73.00 in April of 2012, the stock price plummeted after David Einhorn, successfully bet against Herbalife Ltd. (NYSE:HLF) for his hedge-fund firm, Greenlight Capital, and then participated in the earnings call on May 1, 2012 that sent the stock plunging within minutes, and closed down 20% that day. Bill Ackman, CEO of Pershing Square Capital Management, also held a short position in Herbalife and went public in December giving a three hour presentation proposing that Herbalife Ltd. (NYSE:HLF)’s multi-level marketing program was an illegal pyramid scheme. With Ackman short 20 Million shares, the stock closed on Christmas Eve at $26.06.

Yet all hedge-fund managers didn’t see it this way as Dan Loeb of Third Point took an 8% Stake in Herbalife in early January, and Carl Icahn verbally battled with Ackman on CNBC in December, and since, revealed a stake in Herbalife, which he recently increased to 15.55% of the shares outstanding. The bigger stake makes Icahn the company’s largest shareholder, passing Fidelity, which held 13.9%. Icahn also came to an agreement with Herbalife Ltd. (NYSE:HLF) that adds two of his appointees to the board and allows him to purchase up to 25% of the company.

With the stock jumping to above $40.00 on the news of Icahn’s increased holdings and the SEC investigating whether or not there is a pyramid scheme in play, there is a risk that Ackman’s thesis is proved true, and the stock drops to lower levels — after all, in December 2011 a Belgium Court ruled that Herbalife has established a pyramid scheme, and the court ordered cessation of Herbalife pyramid scheme; however, this isn’t Belgium, and I see a much greater probability of Herbalife Ltd. (NYSE:HLF) continuing to grow its business domestically and globally, as it overcomes the attacks of Bill Ackman.

Ackman has other big investments to worry about also, as his stake in J.C. Penney Company, Inc. (NYSE:JCP) isn’t doing so well after J.C. Penney reported losses of nearly one billion dollars for the fiscal year that recently ended. After that report, J.C. Penney fell from over $22 to under $15 and is stuck in a range between $14.50 and $15.80 currently, but it could pop or drop at any time as J.C. Penney is one of the highest shorted stocks in the market right now, with 44.8% of float shorted. For this reason, J.C. Penney is nothing but a gamble right now with risk out weighting return. I believe that we will see J.C. Penney drop further and rebound later, but with the large number of shorts in this stock on one end, and Bill Ackman behind the company on the other end, the shorts could get squeezed before we see a further drop, so I say stay away for now. 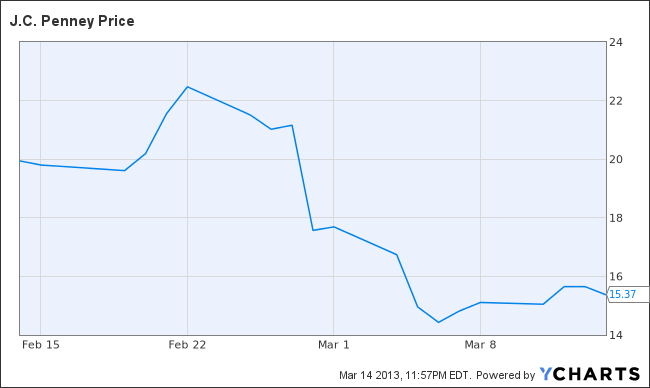