It’s widely assumed that Warren Buffett doesn’t invest in technology stocks, but in recent years, this belief has contrasted with reality. After accounting for zero percent of his equity portfolio at the end of 2010, the tech sector now makes up one sixth of Buffett’s stock holdings. At Insider Monkey, we’ve discovered that hedge funds and other prominent investors’ best stock picks exhibit market-beating potential, so it’s worth paying attention to these developments.

In the case of Buffett and Berkshire Hathaway, they’re not your typical technology investors. They follow a very strict set of rules when selecting investments in this space, which, through our observations, boil down to finding tech companies that: (1) trade at verycheap multiples, (2) pay a dividend, and (3) have sustainable product offerings that will safeguard their survival over the next 15 to 20 years.

With this in mind, the next logical question in many Buffettologists’ minds is: will the Oracle buy shares of Twitter Inc (NYSE:TWTR) once it becomes a publicly traded entity?

This was the same question many Facebook Inc (NASDAQ:FB) enthusiasts asked after its IPO last year and to no surprise, many mega-investors bought in. Buffett didn’t, however, and it is evident that Facebook broke all three of the rules described above. The stock traded at more than 70 times earnings upon going public and there simply wasn’t any assurance that it wouldn’t go the route of MySpace, Digg, Xanga and the rest of social media’s fallen giants. It also didn’t offer a dividend, and still doesn’t to this day. 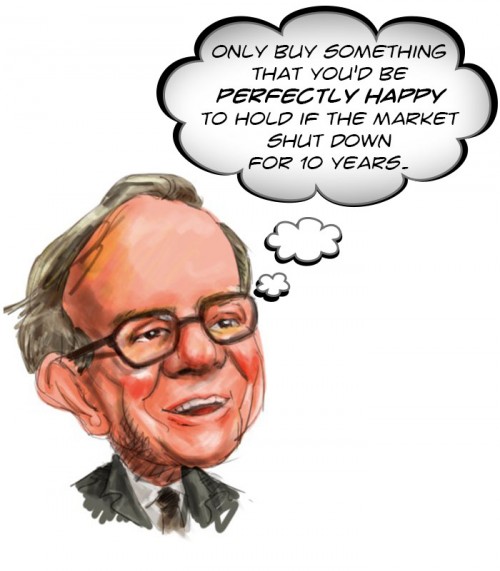 According to most estimates, Twitter will be valued near $11 billion when it goes public, giving it a per share value between $19 and $20. At this price, the company will theoretically trade at about 18.3 times this year’s estimated revenue, which most conservative analysts expect to be around $600 million.

Facebook, meanwhile, is valued at a price-to-sales multiple near this mark, while LinkedIn Corp (NYSE:LNKD) is also in the same vicinity. It’s unreasonable to expect that Buffett would be attracted to a valuation in this range if he hasn’t been before.

Equally as important, we also expect that the billionaire will take issue with Twitter’s outlook over the next 15 to 20 years. While some may argue that the micro blogging service can generate more advertising revenue than a Facebook or a LinkedIn for example, there’s still no guarantee that Twitter will be around in two decades. Obviously, there’s no such thing as 100% certainty in any industry, but there are fewer risks facing Buffett’s favorite investments, like Wells Fargo & Co (NYSE:WFC) and The Coca-Cola Company (NYSE:KO), than there are to anysocial media company.

Putting the final nail in the proverbial coffin, we also know that from Twitter’s S-1 filing, it has no plans to declare dividends “in the foreseeable future.”

So, if Warren Buffett won’t buy Twitter, what stock is responsible for the majority of his investment in the tech sector?

As reported in his latest 13F filing, the answer is International Business Machines Corp. (NYSE:IBM). Buffett and Berkshire hold almost 15% of their $89 billion equity portfolio in the information technology giant, and it meets all three of our aforementioned criteria. IBM trades at a mere 9.9 times forward earnings, has five diversified business segments from IT infrastructure to software, and it pays a dividend yield above 2%.

Warren Buffett Is Wrong — Here’s Why…