Why Time Warner Inc. (TWX) Should Think About Spin-Off As Well

We should have understood that Jeffrey Bewkes, Time Warner Inc. (NYSE:TWX) CEO, was probably intent on selling the magazine business, when he said to CNBC some time ago, “There’s tremendous resilience in the national magazine publishing business.” In other words, he was hinting at the dwindling print publishing business, and that he might look for alternative options in the near future. The future is now the present, and Time Warner is rumored to having secret negotiations to sell off part of Time, Inc., as reported by Fortune (a part of Time, Inc.).

One thing surprises me: Why is part of Time, Inc. being sold off, instead of the whole? Is the magazine-publishing business that unprofitable? Although the latest 2011-2012 research data from The Association of Magazine Media indicates that total magazine sales have fallen by 2.9%, Warren Buffett seem to be optimistic about the publishing business. Reportedly, he already offered to buy Time, Inc. once back in 2007.

“As your friend, don’t do that, it’s a good business,” said Mr. Buffett, according to people who heard Mr. Parsons recount the story. “But,” he added, “If you do sell it, sell it to me.”

Looking at the 2012 annual report, the publishing segment generated operating income of $420 million, which comprises around 7.1% of the total revenue of $6 billion. This, when compared with the segment operating income of $563 million in 2011, does not look to be too inspiring at all. In 2012, publishing revenue dropped 7% to $3.4 billion as revenue at the parent company overall slid 1% to $28.7 billion. Perhaps it is not as profitable as it was back in 2007.

But on the other hand, look at the image below, we do not see any drastic fall in revenue of Time, Inc. either. 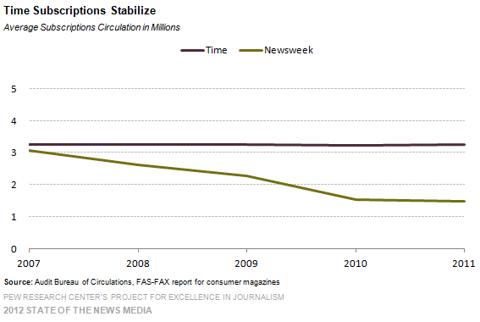 Then again, People and Entertainment Weekly, which are supposedly included in the sell-off portfolio, are world-renowned magazine brands per se. For example, People, which is not only the company’s most profitable title, but also by most accounts the most profitable magazine in the world, with $997 million in advertising sales last year and hundreds of millions more in newsstand and subscription revenues. If you want to stay in the publishing business, you should not sell a highly regarded publication like People.

Moreover, if Time Warner really intends to get out of the publishing business, why does it not sell the whole of its Time, Inc. portfolio at a much higher price? According to this Forbes article, Time, Inc. segmented revenue accounted for 12% of the total revenue of Time Warner: “If Time Warner were to sell all of Time Inc., it would most likely fetch somewhere in the neighborhood of $3 billion to $6 billion.”

Then again, if Time Warner is just looking to cut parent company’s extra expenses needed to make the transition from physical publishing to digital publishing, why does it not do a spin-off instead of sell-off? For example, Rupert Murdoch’s News Corp (NASDAQ:NWSA) has recently filed to spin off of its publishing business with the SEC. The business generated a net loss of $92 million in the three months ending Sept. 30, down from a $38 million profit in the period last year, on revenue of $2.13 billion that was down by 1.5%.