Why The Walt Disney Company (DIS) Is an Attractive Investment

Its theme parks have been the typical vacation spots for people from all over the world for years. The Walt Disney Company (NYSE:DIS) was founded way back in 1923, and has become iconic of the American lifestyle. Attracting multitudinous visitors each year, their hotel services are some of the best in the world. Surprisingly, though, the company is even more dominant in the media industry. With fantastic financials backed by enticing valuation multiples, Disney makes for a great investment.

The massive company recently reported $42.28 billion in revenue, a staggering number to say the least. In the past ten years, as Disney grows and improves itself, this number has been increasing steadily at an impressive and consistent rate, as shown by the chart below. 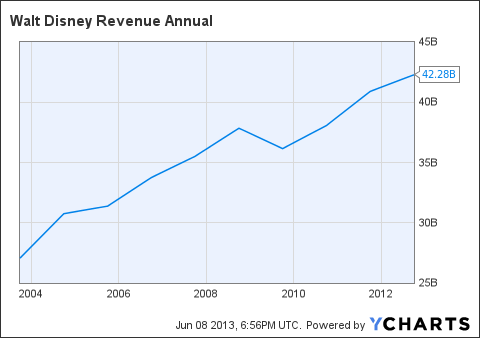 Effectiveness of operations compared to competitors

Disney currently has Bob Iger at the helm, and he has done a wonderful job of managing the company. Disney operates in an extremely efficient and effective manner, and there are a number of statistics that reflect this. The company’s profit margin is currently at 13.64%. The operating margin? An even more impressive 21.19%. The return on assets has been 7.40% while return on equity has been 15.43%. Undeniably, this statistics show the impressive results that Disney has received by operating using the strategies that they do.

Now let’s take a look at two of Disney’s main competitors, News Corp (NASDAQ:NWS). and Time Warner Inc (NYSE:TWX). Although each of these two companies look impressive in some of these statistical measures, Disney is much more consistent across the board. For example, News Corp. has an ROA of only 5.56%. Time Warner is comparatively weak in its profit margin of 11%.

One of the possible reasons why Disney operates more effectively could be because of the fact that it is a much more diversified company than the two competitors. News Corp (NASDAQ:NWS) and Time Warner Inc (NYSE:TWX) don’t have The Walt Disney Company (NYSE:DIS) World Resort and Disneyland to fall back on if the media industry is hit with a tough quarter. This diversification can help Disney keep its margins more consistent and impressive. Just like investors want a diversified portfolio, a company should want diversified operating segments.

In early May of 2013, Disney reported results for the quarterly period ended March 30. There were a number of statistics that were quite encouraging for the company. For example, revenues jumped from $9.629 billion to $10.554 billion. Net income increased a significant amount as well, going from $1.226 billion to $1.621 billion. Diluted EPS went from $0.63 to $0.83, an impressive jump to say the least. The media networks segment (which, contrary to popular belief, makes up a larger chunk of revenue than parks and resorts) experienced an increase in revenue from $4.692 billion to $4.957 billion. The four other segments that Disney operates were able to increase quarterly revenues as well. These revenue increases were as follows:

This consistent, all around growth was accompanied by a few key strategic moves, arguably the most important of which was Disney’s acquisition of Lucasfilm on December 21, 2012.

In the standard discussion of results that comes with each quarterly report, management pointed out a few key points. The company attributed its 32% increase in EPS to “improved performance at all of our operating segments led by Studio Entertainment, Parks and Resorts and Media Networks, and a lower effective income tax rate driven by favorable tax adjustments related to pre-tax earnings in prior years.” One driver of revenue increases in the media networks segment was an increase of 13% in affiliate fee revenue. This was primarily a result of “increases of 7% from contractual rate increases at ESPN.”