Why The Boeing Company (BA)’s Stock Could Keep Flying Higher

It’s true that The Boeing Company (NYSE:BA)‘s 787 Dreamliner hasn’t been a fan favorite in the media this year, with grounded airplanes, battery problems, and budget overruns. Despite all that, investors are jumping over themselves to get their hands on The Boeing Company (NYSE:BA) stock, sending it up 55% year to date. For those investors who’ve jumped in already, good news: This company could get even better. 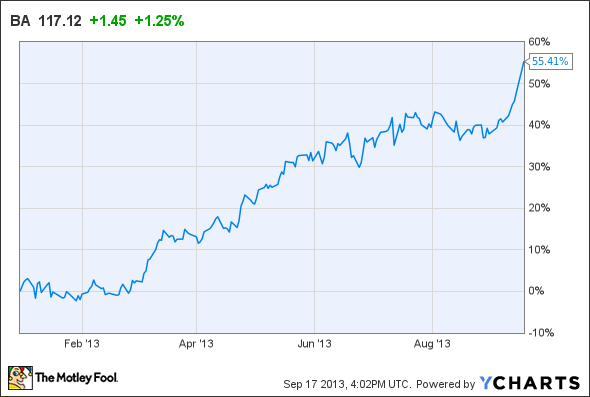 Yesterday, The Boeing Company (NYSE:BA) rose nearly 4% after a very bullish upgrade from Sterne Agee’s analyst Peter Arment. Not only did he reiterate Boeing’s “buy” rating, but he also upped the price target from $120 to $164 – a dramatic increase. He based his new target off the many positive catalysts that Boeing has on the runway ahead.

Arment mentioned the company’s well-known and enormous $410 billion backlog of orders for revenue stability, as well as its share repurchasing program and improving free cash flows. But there’s another very positive factor for Boeing and its many commercial aircraft: its improving production rate.

Today, The Boeing Company (NYSE:BA) announced that it’s expanding its manufacturing plant in Helena, Montana by nearly 50% to support growing demand for its Boeing commercial airplanes, namely its 787-10 Dreamliner. It’s spending nearly $35 million to add more than 55,000 square feet of manufacturing space to the plant.

“Boeing Helena has a great future ahead in support of unprecedented production rates,” said director and site leader Eric Smith in a press release. “This expansion ensures we have the stable workforce, skills and now the manufacturing space we need to support production requirements and take on new production for the 787-10.”

The biggest part to emphasize in that quote is the “unprecedented production rates.” This is hugely important because the 787 is going to be a massive part of Boeing’s profitability going forward. Up until now, it has struggled to produce any profits because of cost overruns and delays. Fortunately for investors, this could change as production ramps up.

Even as the production rate for the 737 improves, consider that Boeing’s decision to reengine the plane rather than develop an entirely new airplane saved the company more than $15 billion, according to Morningstar.

Boeing’s commercial aircraft account for roughly 60% of its revenues. As production ramps up, economies of scale start making that production more efficient, and the company fills its enormous backlog of orders, margins and free cash flow should continue to improve.

The Boeing Company (NYSE:BA) also increased its 20-year forecast, predicting that global commercial aircraft demand would reach 35,280 new airplanes – valued at $4.8 trillion. As aircraft demand increases over the years ahead, Boeing looks well positioned to take more than its fair share – rewarding investors along the way.

The article Why Boeing’s Stock Could Keep Flying Higher originally appeared on Fool.com and is written by Daniel Miller.