Don’t look now but SunPower Corporation (NASDAQ:SPWR) has become the best-performing stock in the solar industry. Over the past year, it’s been better than fellow U.S.-based companies First Solar, Inc. (NASDAQ:FSLR) and SolarCity Corp (NASDAQ:SCTY), and far better than most Chinese manufacturers. Yingli Green Energy Hold. Co. Ltd. (ADR) (NYSE:YGE) and Trina Solar Limited (ADR) (NYSE:TSL) lag well behind even after recent pops higher; only Canadian Solar Inc. (NASDAQ:CSIQ) can come close to SunPower Corporation (NASDAQ:SPWR)’s return (and I’ll get into the reason for that below). 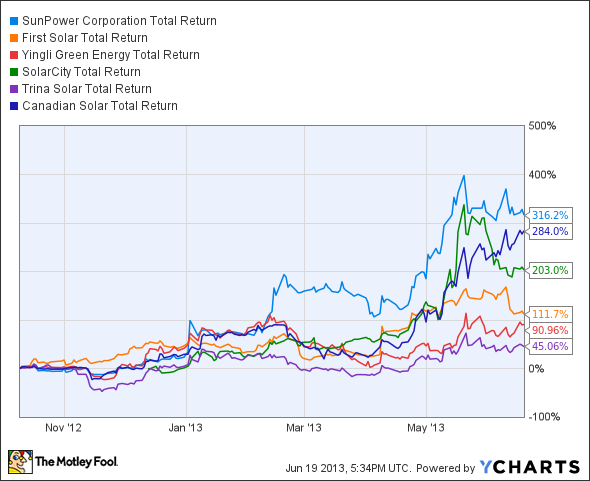 So, why is this stock so hot and can the streak continue? I think so, and there are three big reasons why.

Downstream solar is the dominant paradigm
If you have the choice between risky solar manufacturers and a downstream installer, it’s better to choose the installer right now. They can lock in long-term power supply agreements, building a business that acts more like a bond than a volatile stock. SolarCity Corp (NASDAQ:SCTY) has used this model with success, and despite the fact that it isn’t reporting a profit yet, it’s building solar installations that will generate revenue for 20 or more years.

The same can be said for utility-scale solar, where First Solar, Inc. (NASDAQ:FSLR) dominates. Companies can build projects and sell them off to investors like Warren Buffett — who has bought projects from both SunPower Corporation (NASDAQ:SPWR) and First Solar, Inc. (NASDAQ:FSLR) — or own them and generate long-term cash flow. The latter option is best in the current environment, but if REIT and MLP models are opened up to this industry, that trend may change.

It’s expanding in the downstream market that has put Canadian Solar Inc. (NASDAQ:CSIQ) ahead of competitors as well. It’s building demand for its own panels and raising margins as a result.

But, if you want exposure to residential solar and utility solar there’s no better company than SunPower Corporation (NASDAQ:SPWR). It is one of the largest utility-scale installers in the world and has a concentrated product, called C7, that could drive the next generation of growth. In residential and commercial solar it’s smaller than SolarCity, but it projects more profitable installations and is growing quickly.