Why Nintendo Shares are Wilting Despite Strong Wii U Sales

In its first week of sales in Japan, Nintendo Co., Ltd (PINK:NTDOY) sold 300,000 Wii U units. The console is being sold for around $319 for the basic model, and $382 for the premium black model in Japan. Alongside sales of the device, Super Mario sold 170,000 units, while Monster Hunter sold 110,000 units. Initial sales represent the seventh-best hardware launch in Japan, but still pales in comparison to the original Wii launch (370,000 sold).

In the United States, Wii U sold 400,000 units in its first week of availability.

Investors are punishing Nintendo, whose shares are down 26.1% in the 1-year period: 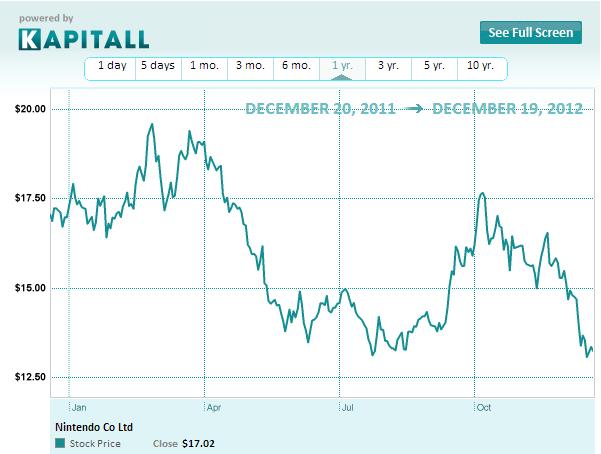 Investors are taking a short-sighted approach to the potential in console gaming. They fail to understand that initial sales do not correlate to the overall success for the Wii franchise. When Sony Corporation (NYSE:SNE) Playstation Vita sold well initially, it did not translate to a follow-through in unit sales or games for the device.

Nintendo’s Wii U FitMeter is scheduled to be launched in early 2013. The exercise game will have a separate pedometer, whose data may be transferred to the console.

Imitation is the highest form of lattery. NIKE, Inc. (NYSE:NKE) is developing a virtual game, through Nike+ Accelerator. Nike’s virtual game works by motivating users to exercising. Data collected from motion is collected. Users are rewarded with NikeFuel points.

The selling point of the Wii U will be its entertainment for large groups of people. Consumers who use the device to kick-off entertainment at their parties will look to Nintendo’s Wii U. At other times, the device supports Hulu+, Netflix, Inc. (NASDAQ:NFLX), Amazon.com, Inc. (NASDAQ:AMZN), and Google Inc (NASDAQ:GOOG). As more and more apps are developed for the console, interest for it will grow. Nintendo shares are not for everyone. They are for investors who have patience and a mid- to long-term time horizon.

Many investors are still wondering, is the gaming console dying? Here’s an infographic by Kapitall that presents both sides of the debate and stock picks that can help you trade the trends.

This article was originally written by Chris Lau, and posted on Kapitall.