Jim Cramer did the unthinkable this week, recommending an airline stock to “Mad Money” viewers. Cramer admits that he has never been a fan of airlines, but he is now bullish on the sector and especially US Airways Group, Inc. (NYSE:LCC) . He thinks that the company’s planned merger with American Airlines will be a rousing success and send the stock higher. However, negotiating a merger with American Airlines was the easy part for US Airways: now CEO Doug Parker and his team need to integrate two major airlines, which will be incredibly difficult. As an investor, it’s probably best to stay away until the integration is complete and the company proves its profitability.

Bad timing
As an investor, if you had put some US Airways Group, Inc. (NYSE:LCC) stock in your grocery cart along with your turkey on the day before Thanksgiving in 2011, you would be sitting on a better than 250% gain today. US Airways has rallied from below $4 then to $14.57 as of Wednesday’s close. 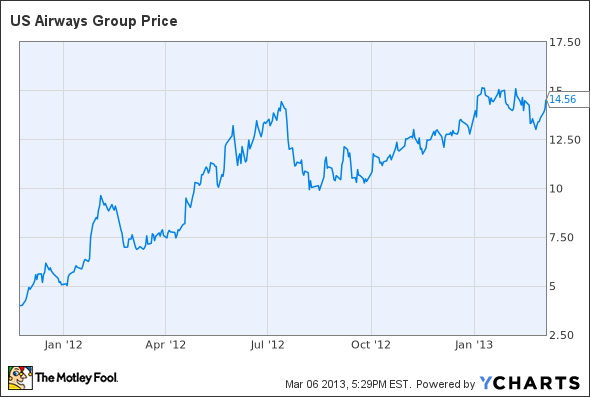 Cramer is thus late to the action, and investors who follow him will be late as well. The current US Airways trading price implies that the post-merger American Airlines will be worth approximately $10.5 billion. While that’s less than Delta Air Lines, Inc. (NYSE:DAL)‘ $13.3 billion valuation, it is higher than United Continental Holdings Inc (NYSE:UAL)‘s $9.8 billion market cap. United is a much better comparison case, because it is in the midst of a merger integration, just as US Airways and American will be for the next few years. On that basis, US Airways Group, Inc. (NYSE:LCC) stock doesn’t seem like such a bargain.

Growing competition
Cramer’s main justification for liking the airline industry now is that consolidation has greatly reduced competition. Following the American-US Airways merger, 80% of domestic traffic will be handled by just four carriers: American, United, Delta, and Southwest Airlines Co. (NYSE:LUV) . However, competition among those four will remain fierce, and the new American could find itself threatened by the others in certain markets. Furthermore, new competition is arising, particularly the rapid growth of ultra-low-cost carrier Spirit Airlines Incorporated (NASDAQ:SAVE) .

Delta is making a push to grow in two key markets where American maintains hubs: New York and Los Angeles. American’s joint venture with British Airways currently dominates the JFK-Heathrow route, which is by far the most important international route from the U.S. However, Delta Air Lines, Inc.(NYSE:DAL) recently bought a 49% stake in Virgin Atlantic, and announced a joint venture that will give the two carriers seven daily nonstop flights from JFK to Heathrow, along with two nonstops from nearby Newark Airport to Heathrow. This will make Delta’s offering much more competitive, and complements its “win in New York” strategy. Delta Air Lines, Inc.(NYSE:DAL) now dominates LaGuardia Airport and is the leading carrier at JFK, while United dominates Newark; the “new” American is clearly behind in New York. American is also under threat in Los Angeles, where it already trails United, and Delta Air Lines, Inc.(NYSE:DAL) is expanding capacity by more than 10% this summer.