This sell down saw Ecopetrol S.A. (ADR) (NYSE:EC) recently hit a new 52 week low of $42.29, and at the time of writing it is only trading at a marginally higher price. The sell down was triggered by declining profitability, rising costs and ongoing issues with achieving production targets. But I believe that with the security situation stabilizing in Colombia because of the ongoing peace talks between the FARC and the Colombian government, that Ecopetrol S.A. (ADR) (NYSE:EC) will be able to put these problems behind it.

Ecopetrol holds a dominant position in the oil and gas industry in Colombia. It holds 37% of all licensed acreage and operates in six high potential basins while controlling all of the necessary oil transportation (oil transport pipelines) infrastructure in an infrastructure-poor country. This makes the other operators in Colombia’s oil industry including Chevron Corporation (NYSE:CVX), Exxon Mobil Corporation (NYSE:XOM), Pacific Rubiales, Petrominerales, Gran Tierra Energy and Canacol reliant upon Ecopetrol’s pipelines to transport the oil they produce.

Ecopetrol Has A Solid Balance Sheet 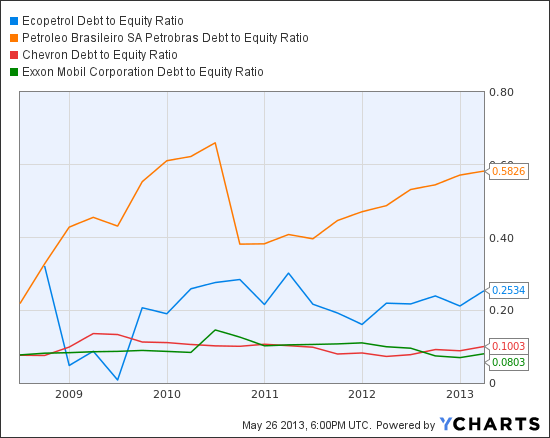 Ecopetrol’s other risk metrics including its debt to EBITDA ratio of 0.5 and operating cash flow to debt ratio of 1.2 are also quite appealing and as the table below shows superior to Petrobras.

But both Chevron and Exxon have superior debt to EBITDA and operating cash flow to debt ratios.

All of these ratios indicate that Ecopetrol is a low risk investment, with solid balance sheet and is not heavily leveraged, which I believe makes it particularly appealing.

Continues to appear expensive in comparison to its peers

But the key for investors is determining whether the company’s share price will rise and deliver value. It is here that Ecopetrol, despite the precipitous plunge in its share price, still appears expensive in comparison to its peers. Ecopetrol has an enterprise value that is 50 times its proven reserves, which is more than double Chevron’s 22 times and more than triple both Exxon’s 16 times and Petrobras’ 15 times. This highlights one of the key problems facing Ecoptrol in attracting investors, the company’s low proven reserves in comparison to its peers.

But the company is extremely well managed, and in the first quarter 2013 delivered an EBITDA margin that is one of the best in the industry at 47%, a double digit return on equity of 24%, and a return on assets of 14%. All of which indicates that the company is extremely profitable and on the back of increasing production, which grew by 6% quarter on quarter will deliver value for share holders.