Why Is Bank of America Corp (BAC) So Volatile?

Every stock is volatile, but some are more so than others. If you’ve followed the erratic performance of shares in Bank of America Corp  (NYSE:BAC) over the past few years, then you know that it falls into the latter group. The question is: Why?

Before getting to that, it’s necessary to define a central concept in investing: beta. According to the Foolsaurus, a glossary of investing terms on Fool.com: “Beta is a measure of volatility of a stock’s return. It compares how much the stock’s returns move relative to the returns of a known market or index, such as the S&P 500 .”

To get back to Bank of America Corp (NYSE:BAC), shares of the nation’s second largest bank by assets have one of the highest betas on the S&P 500. According to the free stock screener at Finviz.com, the bank comes in at 2.39, making it the 20th most volatile security on the index. The average, meanwhile, is 1.17 — theoretically, of course, the average should be 1, but there’s noise in Finviz’s data because it excludes figures for 15 of the 500 components.

At first glance, one would be excused for wondering why shares of a company Bank of America Corp (NYSE:BAC)’s size would more closely resemble a penny stock than the blue-chip goliath that it is. Isn’t it true that the larger a company is, the more stable it theoretically is? And wouldn’t that stability come through in the stock price?

The answer to both is: Yes. Or, more accurately: Kind of. A scatter chart comparing the betas of the stocks on the S&P 500 against their corresponding share prices does indeed reveal an inverse relationship — as stock price goes up, the beta goes down.

And on top of that, there’s no correlation between an individual company’s stock price and its underlying size.

At the same time, however, one can’t help noticing the relationship in the following chart. In the aftermath of the financial crisis, Bank of America Corp (NYSE:BAC) was forced to raise capital by selling shares. Its outstanding share count more than doubled in size as a result, sending its stock price plummeting. Meanwhile, its beta shot up almost simultaneously. 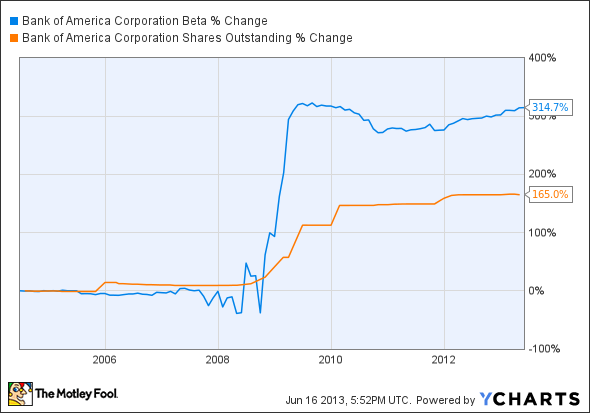