It may be one of the wildest reversals of fortune in modern history. As the 1990s were coming to a close and the nation was increasingly getting “online,” AOL, Inc. (NYSE:AOL) was sitting on top of the world. Its famous “You’ve got mail” notification even spawned a box-office hit.

Broadband Internet increasingly became the norm, causing AOL’s popular dial-up Internet service to lose traction. By the time the dot-com bubble burst in 2001, the company’s growth and revenue had plunged so much that it reported a $99 billion loss in 2002 — the largest loss ever reported by a company at the time. Not much changed between then and 2009, when, after a disappointing merger, it was announced the two companies would part ways.

Since then, AOL has quietly begun to turn things around, despite the fact that only a few investors have noticed the slow comeback. If you’re not afraid of the surprising turns the Internet industry could take, then this could be a rare opportunity to invest in a well-established Internet company.

But before I get into why this is a great turnaroundstock, it’s crucial to understand the company during its earlier days…

The old AOL business model
Who doesn’t remember getting AOL’s free CD-ROMs of the dial-up software in the mail?

This business model seemed ideal at the time. Of course, the dial-up software was used to funnel users through the AOL browser, where the company also controlled the user’s entire online experience.

That meant AOL, Inc. (NYSE:AOL) was in a prime position to generate major ad revenue, fueled by all those unsuspecting dial-up customers. Never even mind the fact that the company was also charging people a monthly subscription fee for the privilege of using the AOL web portal.

But by 2004, many things had changed for the World Wide Web. AOL wasn’t one of them.

For starters, Google Inc (NASDAQ:GOOG) was taking over as the king of Internet search, en route to its current market share of 66%. AOL’s system was definitely a victim of Google’s search empire.

The new AOL
It’s not clear whether the merger with Time Warner was the core problem for AOL over those troubling years, or the only thing keeping it alive. One thing is clear though — the company is better off now.

First, it put former president of Google’s Americas division, Tim Armstrong, as the company’s new CEO. Armstrong has redefined the company for the better through three key pillars of change…

And the results of the work to date? From a distance, there is none. A closer inspection, however, suggests there’s a light at the end of the tunnel.

Though ad revenue is on the rise, it’s more than being offset by the loss of dial-up subscription revenue. But the likely end to that bleeding is around the corner. The $3.36 billion company is expected to generate about $2.13 billion in sales next year, after posting $2.15 billion in revenue for 2012. This is going to be the smallest top-line dip the company’s seen in years. Beyond that, AOL, Inc. (NYSE:AOL) is expected to start growing revenue again. Operating earnings are already on the mend and should reach $1.16 per share in 2013 after slumping to 12 cents per share in 2011.

Still hard to believe? Well, the stock has returned an incredible 150% in the past year alone. Just take a look at the chart below… 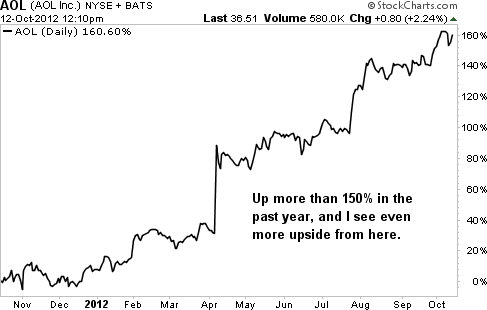 Risks to Consider: Though Armstrong seems to have AOL on track by using some solid Google tactics, we’re still talking about the ever-changing Internet industry, where anything can happen. For instance, AOL recently settled part of a patent-infringement lawsuit with Vringo, Inc. (NYSEAMEX:VRNG). That may ultimately cause the company to rework the way it operates as a search engine, which could be a threat to revenue generation. Take nothing for granted.

Action to Take –> While AOL, Inc. (NYSE:AOL) may be on the upswing of a major rebound effort, it’s still going to take time to reach the light at the end of the tunnel. In other words, it’s still a frothy stock that’s not for the faint of heart. But investors who are willing to wait a couple of years or so, 50% to 60% upside potential during that time isn’t out of the question.