I’ve made no secret of my fondness for OLED-specialist Universal Display Corporation (NASDAQ:OLED). In fact, Universal Display Corporation (NASDAQ:OLED) currently stands alone as my single largest position in my personal portfolio, and I don’t even mind the ridiculous roller-coaster ride I’ve endured as a shareholder since buying my first shares at $15.57 in May 2010.

Despite the volatility, however, those shares have managed to outperform the S&P 500’s perfectly respectable 57% return since then by more than 17%: 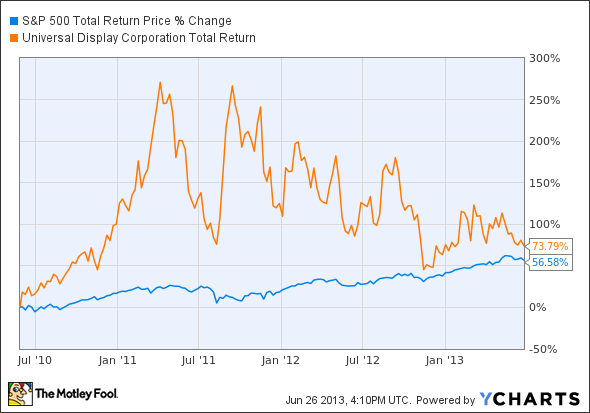 In looking at that chart, though, it’s almost comical how much the stock has fluctuated over the past three years compared to the market’s relatively steady climb, and that’s even as Universal Display Corporation (NASDAQ:OLED) has methodically built up its business around the ever-increasing influence of OLED-driven displays.

But as Warren Buffett wrote in his 2012 letter to Berkshire Hathaway Inc. (NYSE:BRK.B) shareholders, “Mae West had it right: ‘Too much of a good thing can be wonderful.'”

That’s why, early last week, I decided to add to my position in Universal Display Corporation (NASDAQ:OLED).

And, yes, I’m well aware that adding to my already-large position in one company comes with its own risk. To be fair, though, this is a calculated risk I have no problem taking.

Curiously enough, the last time I bought new shares of this company was June 2012, so why buy more now?

To be honest, part of it was simply having some cash available that needed to be put to work. Then again, it helped that shares of Universal Display Corporation (NASDAQ:OLED) also fell more than 16% in a single trading day last month after the company’s first-quarter results disappointed investors.

So why am I not concerned those losses could continue?

As I wrote at the time, apart from the fact that last quarter so happened to be one of the periods during which Universal Display didn’t receive one of its twice-annual payments from the six-and-a-half-year contract it inked in 2011 with Samsung, I couldn’t find much not to like about the report.

Remember, though Universal Display technically lost $0.10 per share last quarter — which was in line with estimates — much of that loss was due to increased operating expenses. For their part, those expenses were largely the result of a combination of $2.7 million in amortization from their recently acquired patents from Fuji (which opens the doors for new OLED research), a $2.3 million increase in R&D costs (a great thing to see from an innovative company like UDC), and a $2 million rise in cost of materials (“due to an increase in the quantity of materials sold, changes in product mix, and increased raw material costs for certain products”).

With this in mind, it’s also important to note that UDC’s sales rose 19% year over year to $15 million, beating consensus estimates that called for revenue of $14 million as more customers licensed and utilized the company’s OLED materials and intellectual property.

Even so, that didn’t stop our inefficient market from imposing one of its trademark knee-jerk reactions to the “disappointing” quarter, much as it has for each of the five quarters since Universal Display signed the contract.